Adil Rami, a French Footballer, is widely recognized for playing with Marseille as a central defender in Ligue 1 in France. In his club career, he has won titles like Ligue 1, UEFA Europa League, and Coupe De France. He was in the 23 man squad that won the 2018 FIFA World Cup, but he did not get the chance to play in the tournament.

Rami was born in Bastia, France on 27th December 1985. His nationality is French, and his birth sign is Capricorn. In his early days, he worked in the city to support himself with jobs like maintenance and cleanliness.

In 2019, Rami is playing for Olympic Marseille in the French Division as a central defender. He joined the club in July 2017 for a four-year deal from Sevilla for a transfer fee of €6 million. After coming to the club, he has played 46 times in Ligue 1 and a total of 72 games, including the Europa League and French Cup from 2017 to 2019.

In Marseille, his weekly salary is around €37,942 and earns approximately €1,973,000 yearly. His contract with the club will remain until the 2020-21 season with the option of extending the contract for one year.

Previously, he played for Sevilla for two years, where he won his first major trophy in club football, UEFA Europa League, in 2016. He arrived at the club in 2015 for a transfer fee of €3.5 million and played a pivotal role in La Liga and Europa League.

He began his professional career in football with Lille in the French League at the end of the 2006-2007 season. Later that season, he became a regular starter for Lille playing 24 league games and established himself as the best central defender in Ligue 1.

In the 2010-11 season, he won the Ligue 1 title playing 36 games in the league. Additionally, he played for other clubs like Valencia and AC Milan from 2011 to 2015. Rami had a successful career and made a net worth of $14 million.

In 2019, Rami was all over the news for his split with his then-girlfriend, Pamela Anderson. The couple began dating since 2017 and were in a living relationship since November 2018. However, Pamela accused him of living a double life, and their relationship was a big lie. 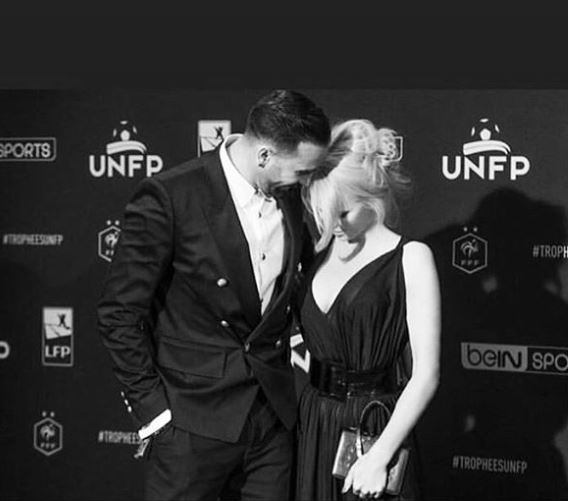 She announced their split via Instagram post, where she slammed the Marseille star of being a monster. In his defense, he also posted on his Instagram, stating that he respects women and remains faithful to his values and beliefs.

Adil Rami with his kids

Previously, Rami was married to a woman named Sidonie Biémont. The couple has two kids named, Madi and Zyan. He made it clear in his Instagram post on 26th June that his priority is his children.

Rami grew up on the island of Corsica to Moroccan parents. Later, his family moved to Fréjus, where his mother worked as a member of the city council. He grew up with three siblings, a brother, and two sisters.

As a sportsperson, Rami has maintained a fabulous physique standing with a height of 6ft and 3inches tall, weighing 88kgs.