AJ Odudu is a television presenter famous for co-presenting the Channel 5 reality show spin-off Big Brother’s Bit on the Side, alongside Rylan Clark and Emma Willis, in 2013. Currently, she is competing on the 19th season of Strictly Comes Dancing, partnering with professional dancer Kai Widdrington.

Originally from Blackburn, Lancashire, Onatejiro “AJ” Odudu was born on 12 February 1988 under the star sign Aquarius. The 33-year-old TV presenter is British by nationality and belongs to the Nigerian ethnicity. She attended St Bede’s RC High School and St Mary’s College before graduating from Keele University with a degree in English and Politics.

Odudu started her career as a reporter for BBC Blast based at Radio Lancashire. In 2009, she landed her first presenting job on the BBC Two series The Almost Perfect Guide to Life and on an online show, The 5:19 Show.

From September 2021, Odudu has been a competitor on the nineteenth series of Strictly Come Dancing. She has been partnered with professional dancer Kai Widdrington.

The Blackburn native has earned most of her fortune from her TV presenting career. Her partakes in journalism as a contributing style editor for women’s fashion magazine ‘Grazia’ has also supplemented her income. As of 2021, she has an estimated net worth of $1.5 million.

The TV presenter is still unmarried, and it seems she has no boyfriend as well. Her social accounts are also void of her romantic affair. However, Odudu knows what she seeks in her partner or husband.

“I like charismatic guys who can take the mickey out of themselves but when it comes to work, they are focused and they know what they want in themselves and in a partner.”

As revealed by Odudu, she has been cheated on by three ex-boyfriends. So, she’s had horrible love life in the past.

In 2018, Odudu’s mother, Florence, took her on a trip to Nigeria to find a husband for her daughter. But they couldn’t find a perfect match.

Odudu was born to Nigerian parents. She is one of eight children born to her parents. Her mother’s name is Florence. Her parents had an arranged marriage, which has lasted for over four decades. 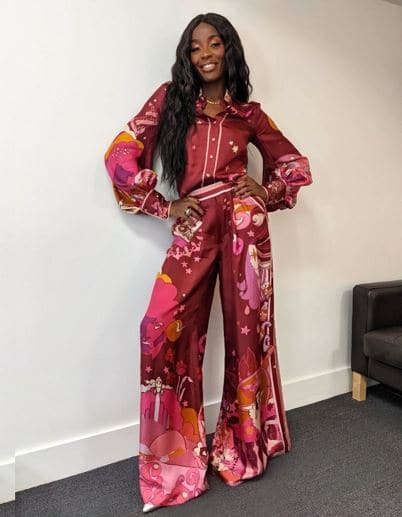 Odudu stands tall at the perfect height of 5 feet 7 inches. She has a well-maintained, fit body that weighs around 58 kgs. She has black hair and dark brown eyes.