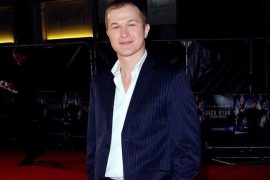 Ukrainian-born British actor, Alec Utgoff is well recognized for his role in San Andreas, Jack Ryan: Shadow Recruit and Mortdecai. Not only that, he was able to receive millions of heart from the Netflix series Stranger Things by portraying the role of Alexei.

Alec Utgoff was born on 1 March 1986 in Kyiv, Ukrainian SSR, the Soviet Union to parents – Roza and Vladimir. Belonging to British nationality and Ukrainian ethnicity, he grew up with a sibling, Alan. As his native language is Russian, he is also fluent in both Ukrainian and English. He earned his education by attending the Drama Centre London were he graduated in both Bachelor’s and Master’s degree.

The 33-year-old actor, Alec made his debut with the role of Fedka in The Tourist in 2010. At the same year, he appeared in short film Over The Hills as Aaron and Chief Hacker in series Spooks. Since the year 2011 till 2013, he landed a role in The Why Men, The Seasoning House, Common People, Outpost: Rise of Spetsnaz and Legacy.

Great day walking around #оружейнаяпалата and #redsquare before going back to work Beautiful city Moscow!❤️😍🙆‍♂️🙌

However, he rose to prominence by portraying the role of Aleksandr Borovsky in Jack Ryan: Shadow Recruit in 2014.

As of 2019, Alec net worth estimation is under review.

The Stanger Things cast, Alec remains tights lips where he is asked about dating related topic. So, the 33-year-old actor might be enjoying his singlehood. Moreover, going through his Instagram, there are no hints about his possible girlfriend.

My little nieces and nephews helping me audition. It was a hostage scene

It seems like Alec loves to keep his personal life low key and is working on to become one of the established actors in the industry.

Alec was born with the real name Oleg Vladimirovich Utgof to the family of Roza and Vladimir. His mother is a musical conductor whereas his father is a heart surgeon and honored doctor of Ukraine. Also, he has a sibling, brother Alan who is a Financier. When Alec was at the age of 11, he moved to London to gain a better education.

Alec height is measured at 6 feet. He has brown hair and brownish color eyes.