Alexander Gilkes is a British millionaire who gained worldwide recognition for his relationship with the tennis champion Maria Sharapova. He is the co-founder of Squared Circles and had previously served as the president of an online auction house Paddle8 from 2011 to 2018.

Originally from Camden, London, Alexander Gilkes was born on July 16, 1979, making him a Cancer. His full name is Alexander Mark Heming Gilkes. The 43-year-old businessman is British by nationality and belongs to the Caucasian ethnicity. Additionally, he attended Elton College with Prince Harry and Prince William. Later, he enrolled at the University of Bristol where he studied Russian and Spanish.

Alexander Gilkes Net Worth and Salary

Gilkes is the founder of Squared Circles, which he launched in 2020. He is also a contributing editor to British Vogue. Previously, Gilkes co-founded the online art auction house called Paddle8 in 2011. He served as the company’s president until 2018. 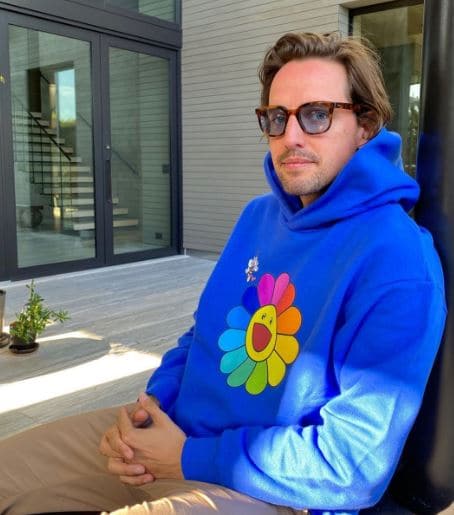 Before founding Paddle8, Gilkes worked at LVMH, a multinational luxury goods conglomerate. He was also a shareholder of Phillips de Pury Company, one of the most famous art auction companies. Besides, he even worked as an auctioneer for Louis Vuitton.

Gilkes is a British millionaire who has a reported net worth of $25 million as of 2022. Meanwhile, his fiancee Sharapova had made $325 million in career earnings until the time of her retirement in February 2020.

Gilkes is about to tie the knot with his fiancee, Maria Sharapova. On 17 December 2020, the duo announced their engagement through their respective Instagram accounts.

The dashing British art dealer met his now-fiance Sharapova in January 2018 but opted to keep a low profile. They made their relationship public in October 2018 after the tennis pro revealed photos of a romantic trip to the Cotswolds.

Since then, the duo didn’t shy away from sharing sweet PDA and attending several events together, including the Academy Awards and the Argento Ball for the Elton John Aids Foundation.

Gilkes is super excited to marry the tennis champ. While announcing their engagement, his fiancee revealed that she said yes to him on the first day they met.

Previously, Gilkes was married to Meghan Markle’s BFF, Misha Nonoo. He married fashion designer Nonoo in 2012 but split in 2016, with their divorce finalized in 2017.

Alexander is a father of a son, Theodore. His wife, Maria, announced that she is expecting a child on her birthday, and on the 15th of July, 2022, she took it to her Instagram and revealed the news. Alexander and Maria are blessed with a baby boy.

The millionaire businessman was born to parents Robyn and Jeremy Gilkes. His father, Jeremy, was a dermatologist and his mother worked in the Department of Eastern Europe and Russian at the University of Oxford. He has a younger brother named Charlie.

Gilkes’ parents raised their two sons in a perfect environment and allowed them to make their own choices in life. His younger brother once dated Duchess Kate’s younger sister, Pippa Middleton.

Gilkes has a tall height of 6 feet 2 inches and weighs around 67 kg. His gold-brown hair and aquamarine blue eyes provide a perfect complement to his charming personality.

How old is Alexander Gilkes?

Where is Alexander Gilkes from?

What does Alexander Gilkes do for a living?

Alexander Gilkes is an auctioneer and co-founder of Squared Circles.

How rich is Alexander Gilkes?

Alexander Gilkes is worth in millions, thus is rich.

What is the net worth of Alexander Gilkes?

Alexander Gilk net worth is $25 million.

Alexander is not married currently, but was married to Misha Nonoo from 2012 to 2017.

Who is Alexander Gilkes partner?

Alexander Gilkes' partner is Maria Sharapova, with whom he has engaged.

How many kids does Alexander Gilkes have?

How tall is Alexander Gilkes?