Aleyna Tilki is a Turkish singer-songwriter who came into prominence after becoming a semi-finalist on season six of Turkey’s Got Talent in 2014. Besides, she is the first Turkish artist Warner Music signed for international projects. She made her English language debut with a heavyweight-filled tune, ‘Retrograde.’

Originally from Konya, Turkey, Aleyna Tilki was born on 27 March 2000 under the star sign Aries. The 21-year-old singer is Turkish by nationality and belongs to Greek ethnicity. She completed English language training in Los Angeles.

From the age of three, Tilki has been singing. She made her first television appearance when she was only eight years old. Besides, she was a semi-finalist on the sixth season of the Turkish’s Got Talent series.

Tilki achieved national recognition after she released the song Cevapsiz Çınlama, along with its music video. The song went viral, amassing more than 490 million views on YouTube. She then released her first solo single, Sen Olsan Bari, in July 2017 that reached no 1 in Turkey’s charts. Her other singles are Nasılsın Aşkta?, Yalan, Bu Benim Masalım, and Retrograde.

In 2020, Tilki landed a lead role in the television series İşte Bu Benim Masalım. She has also appeared in commercials of Fuse Tea and Cornetto.

The Turkish singer has earned a substantial sum of money from her music career. Her appearance in the TV series will likely boost her earnings and income in the coming days. As of December 2020, she has an estimated net worth of $3 million.

Tilki prefers to stay mum when it comes to her dating life. She hasn’t announced being in a relationship with someone to the public. However, she has been romantically linked with Turkish composer Emrah Karaduman.

Though the couple hasn’t made their relationship official, Emrah constantly supports his alleged girlfriend’s music through his Instagram page.

The young Turkish singer hasn’t revealed the identity of her parents. All that is known is that her mother is from Of, Trabzon, and her father is from Konya. She grew up with a younger sister named Ayca. Her sister is an actress, best known for her Iste Bu Benim Masalım, Masal Satosu: Sihirli Davet, and Cengiz Semercioglu ile Sabah Sohbeti. 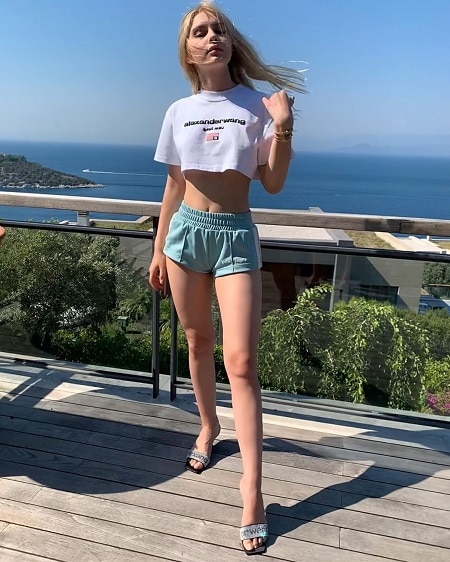 Tilki stands tall at the height of 5 feet 9 inches. She has a slim, slender body that weighs around 51 kg. Her blonde hair and dark brown eyes provide a perfect complement to her stunning personality.