Ali Carter is often referred to as an Ace of snooker because of his calm, smooth gameplay in billiard sports. He is best known The Captain from his hobby piloting airplanes and Mr. Anger. He is two-time runner-up in the World Championship of 2008 and 2012. Ali is also known for being high as second in the World rankings of Snooker. Besides his career, Ali health-related topic often emerges and his admirer’s wonders if he recovered or not?

So, let’s know everything about the British professional snooker player professional as well as personal life!

Born on 25th July 1979, Ali Carter’s hometown is in Chelmsford, Essex. He is Native British belonging to English ethnicity. His zodiac sign is Leo. He is the son of Carter’s family, but his parent and siblings information isn’t disclosed yet. However, form the early teens, he was fond of playing snooker. His education information is also unknown.

At the age of 17, Ali began his journey of professional snooker. In 1999, he won the Benson and Hedges Championship which help him rose toward fame. Further, he reached at the semi-final round of 1999 Grand Prix and in the 2006-07 season of the European Master.

Later in the 2008-09 season, the British snooker player concurred the Welsh Open title against Joe Swaii. Then, he got defeated by John Higgins in the semi-final round of the 2010-11 season. He was also lost twice in the final of World Snooker Championship against Ronnie O’Sullivan in 2008 and 2012. Moreover, in 2012-13, Carter won the title of German Masters and World Open in 2016-17. 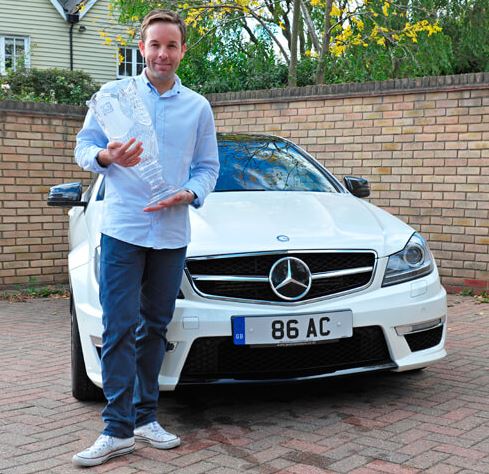 As a genius snooker player, Ali has successful accumulate a massive amount of net worth from his professional career. Currently, he makes a yearly salary of £333,525 and has won the prize money of £425,000 from 2018 World Snooker Championship. His net worth estimated at $8 million.

Professional snooker player, Ali is in a romantic relationship with a beautiful girlfriend Stella English. She is the former Apprentice winner. The pair began their love life since 2016. In 2017, the couple welcomed a baby. Previously, in May 2017, Stella was spotted with her beloved boyfriend in a stunning red dress revealing baby bump in The Dorchester in London.

I’m back in the top sixteen and looking forward to welcoming our little bundle in the next few weeks. We couldn’t be happier!

However, the duo’s marriage isn’t announced yet. Previously, the genius snooker player has already welcomed his first baby with the former girlfriend, Sarah. His first child is a son, named as Max, born in 2009. He often loves sharing the picture with his child on his social media site.

Ali was born in the house of Carter, but he tends to keep his parents’ information away from media eyes. His siblings’ details are also unknown till this date. However, on 19th June 2016, he tweeted a picture of his father having BBQ in the house.

The 3 generation on father day! Bbq at the #captainshouse pic.twitter.com/PXJnV1QiJe

His full name is Allister “Ali” Carter. He grew up in Colchester city and was interested in pursuing snooker for early teenage. Now, he holds the footprint of being a parent and enjoys his quality time with his beloved family.

As a British professional snooker player, Carter’s height is measured at 1.73 meters and weighs appropriately. His skin is white toned, has light brown hair and blue eyes.

In 2003, Ali was diagnosed with Crohn’s disease and controlled by limiting dairy and gluten/ wheat in his diet. In 1st July 2013, he was diagnosed with testicular cancer. A day later, he went through surgery and was advised to rest for a month. After recovering from the surgery, he stated that he would take leave from snooker for six months till April 2014.

After a month, The World Snooker announced that he was diagnosed with cancer in his lung and would receive intensive chemotherapy course. He completed his treatment and secondary tumor in August.