Ari Fournier is a rising model who is already signed to more than one leading agency. She started her career posting on her social media, which quickly gained the attention of many agencies. She has modeled for various brands and has traveled around the globe for various modeling gigs. However, the model gains attention as she is linked to a popular actor.

Ari Fournier was born in 1999 in Montreal, Canada. She celebrates her birthday on 28th August, which makes her age 21 and zodiac sign Virgo. The beautiful model holds Canadian nationality and comes from White ethnicity.

Ari Fournier is an upcoming model who started her profession at the age of 15. At the beginning of her career, she posted pictures of herself on social media which led to her being discovered by an agency. During the first years of her modeling career, she modeled part-time as she was attending high school. Later, she started her career full-time and ventured on modeling trips to countries like China and Barcelona.

Her Instagram represents agencies such as Premier Models, Elite Model Management, and Folio Modeling Agency. Likewise, she also has over 92k followers on her Instagram. The model’s Instagram is filled with gorgeous modeling shots. As of 2021, Ari Fournier’s net worth is still under review.

Ari’s dating life makes all the headlines after the model was spotted with the Riverdale actor Cole Sprouse. Cole, who was publicly dating his costar Lili Reinhart, seems to have moved on from their breakup last year. The dating rumored came after the alleged pair was spotted walking around Vancouver, Canada.

According to sources, the pair were holding hands while taking a stroll together. While the pair has not talked publicly about their relationship, it’s not sure how the duo crossed paths. On the other hand, Cole was last spotted with another model Reina Silva after his breakup with Lili. Regardless, we will have to wait for the duo to make the relationship official before being sure.

The model was born to her father, Robert Fournier, and her mother, Chantel Tetreault. Her mother is a former model and the owner of an Equestrian Center. Likewise, her family also consists of her sister Gabrielle. 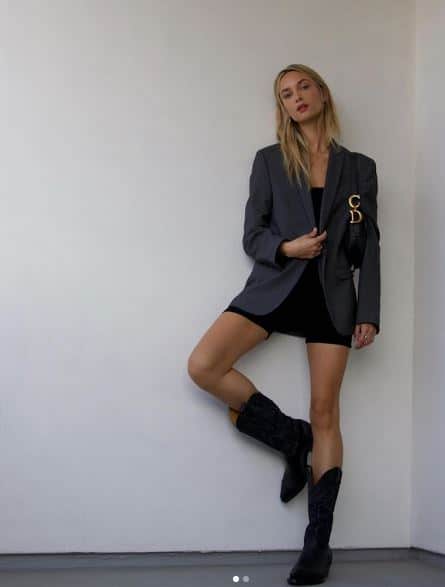 As a model, Ari surely possesses attractive features. The beautiful model has a height of 5 feet and 8 inches. She has a slim and stunning curvy body. Her body measures 32-24-35. Likewise, her beauty is magnified by her gorgeous blonde hair and blue eyes.