Arizona-native Bob Baffert is one of the most successful Thoroughbreds trainers in the history of horse racing. He is a two-time Triple Crown-winning trainer and held the record for most Kentucky Derby wins (seven). Besides, he was inducted into Racings Hall of Fame in 2009.

Originally from Nogales, Arizona, U.S., Robert A. Baffert was born on 13 January 1953, which makes him a Capricorn. The 68-year-old racehorse trainer is American by nationality and belongs to the Caucasian ethnicity. He graduated from the University of Arizona’s Race Track Industry Program with a Bachelor of Science degree.

At the age of 17, Baffert scored his first victory at legalized tracks in 1970. After graduation, he began training quarter horses and established himself as a trainer by age 20. Eventually, he started running stables of other trainers. In 1991, he switched to training Thoroughbreds full-time at Los Alamitos Race Course. Next year, he got his first big break when he won his first Breeder’s Cup race with Thirty Slews.

His history in the American classic races began in 1996 when his three-year-old colt, Cavonnier, ran second in the Kentucky Derby. And the rest is history! He holds the record for seven Kentucky Derby wins, seven Preakness Stakes wins, three Belmont Stakes wins, and two United States Triple Crown wins. He also boasts his overall Breeders’ Cup win to 17. 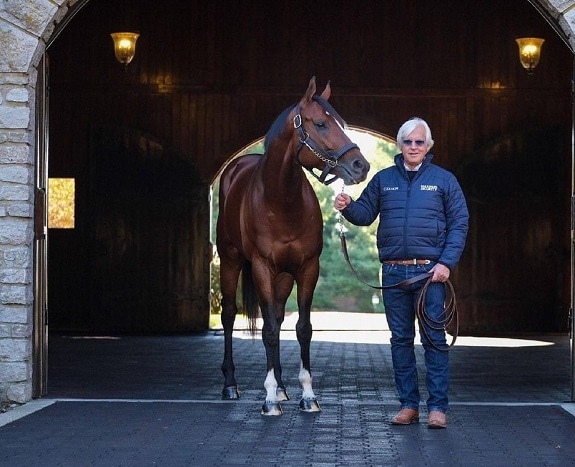 Baffert won the Eclipse Award for Outstanding Trainer for three consecutive years (1997-99) and helped 11 horses to the title of Horse of the Year in their respective divisions. In 2009, he was inducted into the National Museum of Racing and Hall of Fame.

As one of the most successful trainers in the history of horse racing, Baffert earned millions of dollars in prizes and stud fees. To date, horses trained by him have earned hundreds of millions of dollars cumulatively, and Baffert has made eight-figure income from his impressive career. As of 2021, he has a whopping net worth of $30 million.

Baffert has been married twice. He was first married to Sherry with whom he shares four children: Taylor, Canyon, Forest, and Savannah.

In 2002, Baffert married his second wife, Jill, who is a former television reporter. They welcomed a son, Bode, in 2004. Baffert and his family now reside in California.

Baffert was born to Bill Baffert Sr. and Ellie. His family lived on a ranch, raising livestock. When Baffert was 10 years old, his father bought Quarter Horses, and he practiced racing them on a dirt track.

Baffert has a decent height of 5 feet 7 inches. He has a healthy, fit body that weighs around 78kg. His hair has already turned white, and he has brown eyes.