Brandi Glanville is a reality TV star and former model best known for her appearances on Bravo’s The Real Housewives of Beverly Hills. She has also competed on other hit reality shows and penned down two books.

Originally from Salinas, California, Brandi Lynn Glanville was born on 16 November 1972 under the star sign Scorpio. The 48-year-old TV personality is American by nationality and belongs to the Irish-American ethnicity. She attended Willow Rancho Baptist School and Gloria Dei Luther before graduating from John F. Kennedy High School.

Glanville has a varied career as a former model, television personality, fashion designer, and author. She started modeling at the age of 16 and went on to work for several renowned magazines and brands. She launched a clothing line Brandi B in December 2012.

The former model appeared on the Bravo reality series The Real Housewives of Beverly Hills in 2011. She also competed in the seventh season of Celebrity Apprentice in 2015. Her other TV credits include Famously Single, My Kitchen Rules, Celebrity Big Brother UK,  and Marriage Boot Camp: Reality Stars Family Edition. Besides, she appeared in TV series and films such as 90210, Missing at 17, The Hungover Games, and Sharknado: The 4th Awakens.

Apart from acting, Glanville has also penned some books such as Drinking and Tweeting: And Other Brandi Blunders and Drinking and Dating: P.S. Social Media Is Ruining Romance. She also endorses beauty and wellness products on Instagram.

Glanville has earned millions of dollars from her impressive, varied career. She lives an expensive, luxurious lifestyle, thanks to the massive wealth that she accrued as a TV personality, author, influencer, and entrepreneur. As of 2021, she has an estimated net worth of $5 million.

Glanville is currently single. But she was once married to actor Eddie Cibrian. She married Cibrian in 2001, and the two later welcomed two sons – Mason and Jake. After eight years of marriage, the couple announced their separation in July 2009. Their divorce was finalized on 30 September 2010.

Before her failed marriage with ex-husband Cibrian, Glanville had relationships with actors like David Schwimmer, Matt LeBlanc, Gerard Butler, and Ben Stiller. After the divorce, she dated women as well. She has hooked up with Denise Richards and Carlton Gebbia.

The Real Housewives of Beverly Hills star is the middle child of her parents – Judith Swinehart and Guy Glanville. She grew up alongside an older sister Tricia and a younger brother Michael in Sacramento, California. Her father used to grow marijuana, and she would sell it as she got older. Together with her two siblings, she even blackmailed her father for money.

Glanville’s father had three jobs to support the family. Her mother worked as a housekeeper. 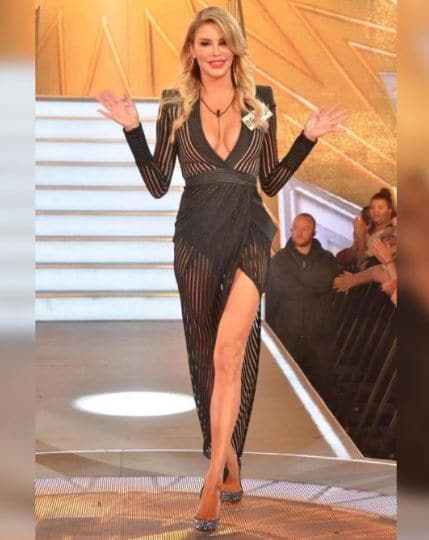 Glanville stands tall at the height of 5 feet 10 inches. She has maintained her body quite well and weighs around 58 kgs. She has blonde hair and brown eyes.