Not just a celebrity wife, Candice Crawford is a known name for her own achievements, be it as a beauty queen or an entrepreneur.

Candice Crawford is an American beauty queen turned journalist who had been the titleholder of Miss Missouri in 2008 and the top ten semi-finalists of the Miss USA. Besides her gorgeous looks, she is known as the wife of former National Football League Quarterback. Tony Romo, who had played for Dallas Cowboys throughout his career.

She started off as a beauty queen during her high school days participating in Miss Teen USA and several others.  In addition, during her college, she won Miss Missouri and finished on the top ten in Miss USA.

Besides such pageants,  She started working as a Journalist, as a sports reporter and anchor, in local station KOMU-TV and the same led her to work as an intern for two years, reporting for Dallas Cowboys.  She has also worked for CW33 covering high school competitions, festivals and events as well as presented her own segment “Up All Night”.

For CW33, she worked for “The RC Project” and “Special Edition” and she left the network in 2011 for her wedding.  She acted as a judge for “Dallas Cowboys Cheerleaders: Making the Team”,  Also, she owns “Hawk+Sloane” with Hollie Siglin that deals with producing oil spray that adds to her income. Though her exact income is not known, her networth stands at a substantial sum of $10 million.

Candice’s husband Tony Romo is worth $70 million and he has an annual income of $17 million which subsequently adds to her income.

Candice met Tony Romo in 2009 when she was working in the Dallas Feature as a sports broadcaster. He asked her out and they eventually start dating. On the day she turned 24 i.e. on December 16, 2010, Tony had proposed her with an 8-carat yellow diamond ring and they got married on May 28, the following year.

Candice and Tony got married among a total of 600 people, including the former and current “Dallas Cowboy” members. The couple is blessed with three sons: Hawkins Crawford (2012), Rivers (2014) and Jones McCoy(2017).  Since Tony loves girls, they might even be planning for a girl child.

Candice was born on December 16, 1986, in Lubbock, Texas to Dana Crawford and Chris Crawford. Her dad was a dermatologist and her mom was a homemaker. She has an elder brother, Chase Crawford who is a famous actor from the “Gossip Girl” franchise.  She grew up along with her brother in Dallas and attended Trinity Christian Academy.  She used to participate in a beauty pageant during her school.

She completed her high schooling in 2005.  Later she enrolled in the University of Missouri and achieved a degree of broadcast journalism.  During her University days, she participated in Miss Missouri and won the pageant. 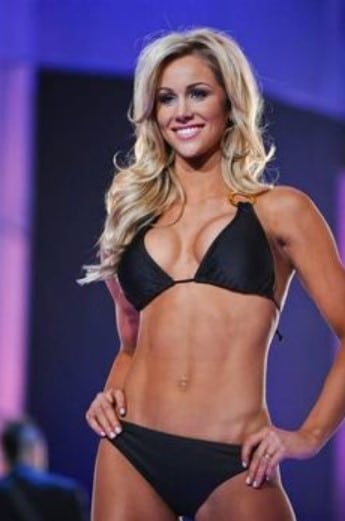 The blond beauty has a pair of mesmerizing blue eyes like her parents and her brother Chase. She stands at a height of 5 feet and 8 inches and weighs around 54 kgs. She has a slim figure and she wears a size 2-4.