It is heart-aching time for Carley McCord’s family as she died in a plane crash in the city of Lafayette. She was one of the loved news reporters who had worked for sports networks like WDSU-TV, Sports Television, and ESPN3. She was also an in-game host for the Pelicans, New Orleans, and the Louisiana Sports Hall of Fame.

Carley McCord was born on Baton Rouge, Louisiana, in 1989. Her birthday falls on the 24th of July, and her zodiac sign was Leo. She died on 29th December 2019 due to a plane crash. Moreover, she held the American nationality and belonged to the white ethnical background. Regarding her parents’ information, it remains confined. Also, Carley garnered her education as Film studies form the New York Film Academy. Then, she attended Northwestern State University and later Louisiana State University.

Carley’s plane was en route to a college football playoff game crashed shortly after it take-off on Saturday, 28th December 2019. According to Federal Aviation Administration Spokesman, Tony Molinaro, the plane crashed in the city of Lafayette, a mile from the regional airport.

BREAKING: A small plane has crash landed in Lafayette, Louisiana, 2.3 miles from the airport. There are several fatalities. 2 people were transported from the scene with serious burns.
The plane landed in a post office parking lot & skidded into a field, after crashing into a car pic.twitter.com/KoQxc6Dxe4

Lafayette Fire Chief, Robert Benoit said, the eight-passenger aircraft was loaded with six-passenger in which five of them were killed. As the sixth is a 37-year-old man is going on the area hospital along with two people from the post office.

Nevertheless, The National Transportation Safety Board twitted that,

A Multimedia and professional broadcaster, Carley began her career as an in-house reporter for the Cleveland Browns in Cleveland, Ohio. After a few months, she started working as a morning show cast-member on a Hot AC formatted station in CBS Radio Cleveland.

After serving for two years in CBS, Carley moved back to her hometown to pursue a broadcast career. Eventually, she served for Guaranty Media as a radio host in 104.5 ESPN Baton Rouge and 100.7 The Tiger. Then she went to sport-television and worked as full time after three-years with Guaranty Media. 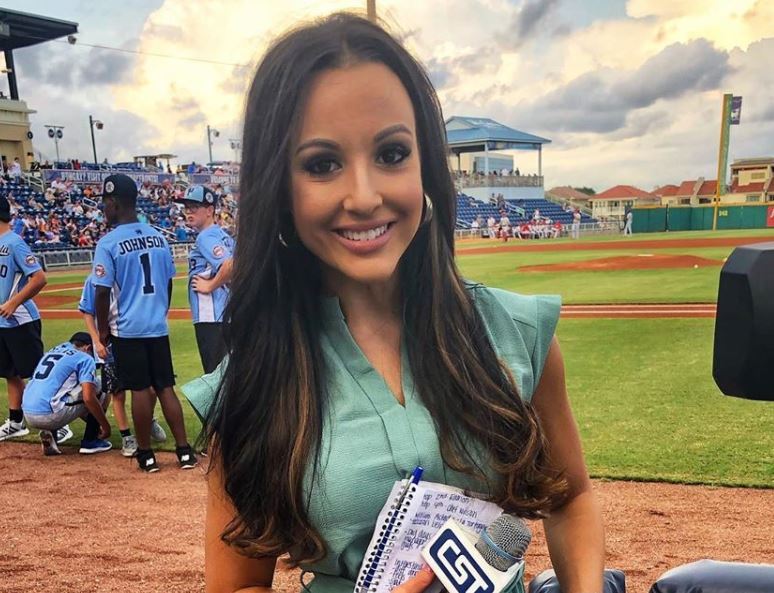 Talking about her sports reporting career, Carley had served for numerous networks like ESPN3, WDSU New Orleans, Cox Sports, and more. She was an in-game host for the New Orleans Saints and New Orleans Pelicans.

According to CelebWAGs.com, Carley’s net worth estimated at $200 thousand.

Before her death, Carley was a married woman. She had shared her oath to a husband named Steven Ensminger Jr in January 2018.

On their wedding special, her husband twitted that,

I can’t say enough about this girl! I’m the luckiest man in the world to finally call her my wife! She is my world and she has my heart forever! I love you Carley! @CarleyMcCord #justmarried #happilyeverensminger

The Sports news reporter was born in the McCord family and had a middle name, Ann. However, she hadn’t disclosed any information regarding her parents’ and siblings’ information. But, she had father-in-law, Steven Ensminger, who works as an offensive coordinator for LSU.

Talking about her childhood, Carley went to study film studies at the New York Film Academy in 2008. Then, she went to Northwestern State University and graduated with a Bachelor’s Degree with Liberal Arts and Sciences/Liberal Studies in 2011. Then, she attended and graduated with a Bachelor’s degree in Broadcast Journalism at Louisiana State University.

Carley McCord was one of the sweetest sports reporters in the industry, which led her into the limelight. But, her height and weight remain confined. She had black color hair and eye color.