Carolina Sarassa is a Columbian anchor and reporter known for winning three-time Emmy Award. She is the correspondent worker for Univision Communications Inc. for the past three years. Besides her outstanding media coverage skills, she is also an author who published a book named Dancing on Her Grave: The Murder of a Las Vegas Showgirl.

Carolina Sarassa was born on 19 April 1984 in Medellin, Colombia. Belonging to Colombian nationality and Mixed ethnicity, she hasn’t spoken much about her parents and sibling. However, she garnered education from Florida International University and earned a Bachelor’s degree in Science and Mass communication in 2005.

Carolina is known for her professional career as a networking media personality. As being the News Correspondent at Univision Communication Inc., she has accumulated an enormous amount of net worth. She has served as an anchor for four years from 2008 to 2012 at the channel. Then, from 2015 to 2016, she has even served as a reporter at NBC TELEMUNDO. 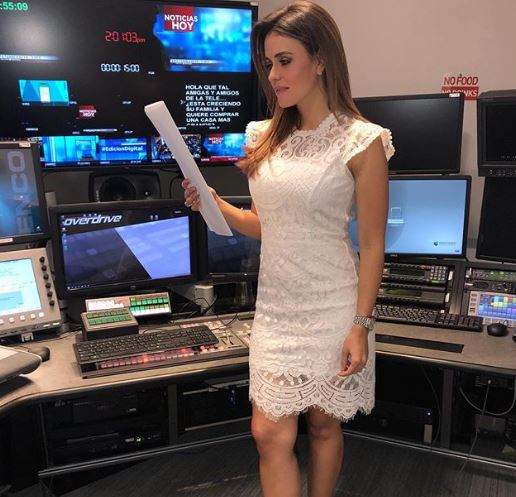 The Colombian anchor, Carolina has already exchanged her wedding vow with her beloved husband, Andres Chacon. Her husband is a Senior Marketing Manager at Telemundo Deportes. The lovebird turned their love life into a beautiful marriage on 13th October 2011.

The couple first met each other through academic years in 2008. After knowing for years, Carolina and Andres gradually changed their friendship into dating.

In October 2018, the pair announced Carolina’s pregnancy news through social media. Then, on 3 February 2019, she surprised her well-wishers by sharing a cute picture with her newborn baby named Chloe Sophia.

Despite having a busy schedule, Carolina and her husband, Andres take some time for their nuclear family.

Carolina was born in the family of Sarassa to parents whose named haven’t been surfaced yet. Her father worked as a salesman for Postobon. At the age of 13, she moved with her family to Miami, United States and lived as an undocumented immigrant.

The anchor and reporter, Carolina’s height and weight haven’t been revealed yet. It is known that she has blonde hair and black eyes.