Casper Ruud is a Norwegian professional tennis player who has a career-high ranking of world No. 10 in singles, achieved on 13 September 2021. He is the first Norwegian player to win an ATP title, having already won six. At the 2021 San Diego Open, he won his fifth tour-leading tournament of the year, defeating Cameron Norrie in the final.

Originally from Oslo, Norway, Casper Ruud was born on December 22, 1998, under the star sign Capricorn. The 23-year-old tennis player is Norwegian by nationality and belongs to the North Germanic ethnicity.

Ruud turned pro in 2015 but couldn’t win any of the titles both in singles and doubles in the season. He started the 2016 season as the world’s No. 1 ranked Junior player. Following his consecutive wins in his first-ever ATP Challenger tournament, Ruud received a wildcard to the 2016 Chengdu Open, but he lost to Viktor Troicki in the first round. He also reached the final of the ITF Junior Masters but again lost to Hong Seong-chan.

In 2017, Ruud received a wildcard into the ATP 500 event 2017 Rio Open, where he advanced to his first-ever ATP level semifinal. He then qualified for his first Grand Slam at the 2018 Australian Open, but he couldn’t advance to the third round. He then reached two ATP Challenger finals in two weeks but couldn’t win any of them. In July 2018, he beat defending champion David Ferrer in straight sets at the 2018 Swedish Open.

In the 2019 season, Ruud reached the semifinal of the 2019 Brasil Open and achieved the career-high ranking of No.94. He reached his first-ever ATP Tour-level final at the U.S. Men’s Clay Court Championships, where he lost to Cristian Garin. Following his best performances, he was qualified for the 2019 Next Generation ATP Finals but got knocked out in the round-robin.

In February 2020, Ruud defeated Pedro Sousa in the final of the 2020 Argentina Open, becoming the first Norwegian tennis player to win an ATP Tour title. He then reached the semifinal at the 2020 Italian Open, where he lost to Novak Djokovic.

Casper Rudd Net Worth and Salary

At the 2021 Geneva Open, Ruud won his second ATP title after defeating Pablo Andujar in straight sets in the final. He won his second title of the year and third in total when he beat Federico Coria in the final at the 2021 Swedish Open. He then continued to win the third and fourth titles of the season, becoming the first ATP player to win three titles in as many weeks since Andy Murray in October 2011. In October, he won his fifth tour-leading tournament of the year at the 2021 San Diego Open after defeating Cameron Norrie in the final. 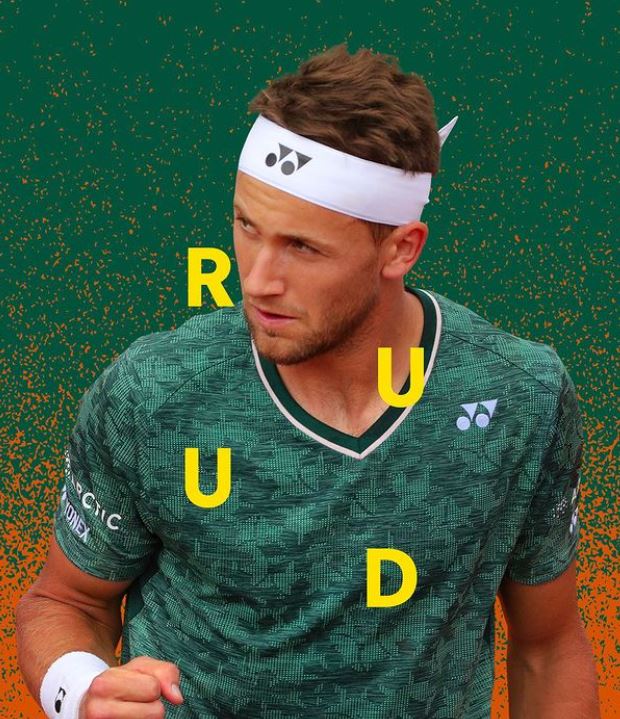 According to the official ATP website, Ruud has earned US$6,419,239 as prize money throughout his career. He also earns hundreds of thousands of dollars from sponsorships and endorsement deals. As of 2022, Casper has an estimated net worth of $7.7 million.

Rudd is lucky both on and off the court. He has the luck of dating his lovely girlfriend, Maria Galligani, for over three years. His girlfriend is a student of psychology at the University of Southern Denmark. Over the years, Maria has kept appearing on Ruud’s Instagram page while maintaining a low profile herself.

As of 2022, Casper is not married or has a wife. We might get news of him marrying Maria soon.

The Norwegian tennis player is the son of Christian Ruud and Lele Cathrine. His father is a former pro tennis player who achieved a career-high singles ranking of World No. 39 in October 1995. He grew up alongside two sisters – Caroline and Charlotte – in Snaroya in Baerum.

How old is Casper Ruud?

What nationality is Casper Ruud?

Casper Ruud is Norwegian by nationality.

Who is Casper Ruud’s father?

Casper Ruud’s father is Christian Ruud, who is also a former Tennis player.

What is Casper Ruud’s net worth?

Casper Ruud has an estimated net worth of $7.7 million.

No, Casper Ruud is not married or has a wife.

Who is Casper Ruud’s girlfriend?

Casper Ruud is dating his girlfriend, Maria Galligani, with whom he is together since 2018.

How tall is Casper Ruud?