Originally from California, Los Angeles, Chase Mattson was born on 03 June 1994, making him a Gemini. The 26-year-old model is American by nationality and belongs to the white ethnic group. He attended Colony High School and later studied sign language at Irvine Valley College.

Initially, Mattson worked at a local Hollister store while he was in high school. After graduating from high school, he began modelling for different agencies. At the age of 20, he even signed with an acting agency, Luber Rocklin Acting. 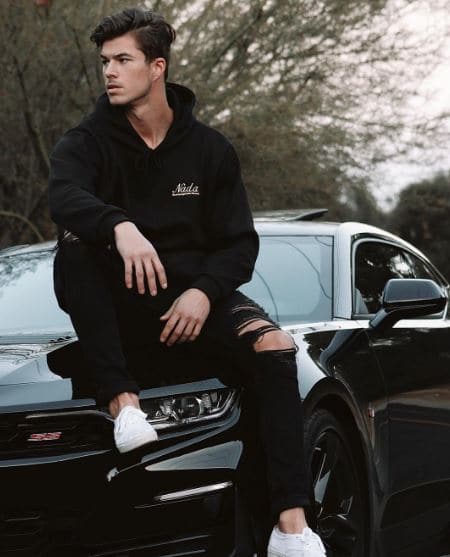 Mattson is mainly signed to Next Models LA/London agency. He is also represented by several agencies such as Models Direct Management, LA Models Runway, Mega Miami, and Independent Men Milan.

Mattson also uploads his modelling shoots on his Instagram, where he has over 386k followers. He earns a decent sum of money from his modelling career and his merch, where he sells hoodies, t-shirts, sweatshirts, and so on. As of 2020, Mattson has an estimated net worth of $300 Thousand.

The handsome Mattson is already taken. He is currently engaged to a world-class gymnast and TikTok star Kelianne Stankus.

Mattson and his now-fiancee, Stankus, have been vocal about their romantic relationship. The couple started dating back in May 2020. Since then, the two have been inseparable.

Mattson popped the question to the gymnast on 12 December 2020. His girlfriend announced the news of their engagement on her Instagram, where she shared a series of pictures, showing off her engagement ring.

The dashing model was born to parents Edward Mattson and Laurie Galal. He is one of six children born to his parents who are now divorced. He grew up in Ontario, California with his four brothers -Eddie, Cameron, Kyle, and Brandon – and only sister Peyton.

Both his parents have married another partner. His father, Edward, is married to Teresa Mattson and lives with her in Nevada.

Mattson has an admirable height with a fabulous physique. He stands tall at the height of 6 feet 2 inches and weighs around 72 kg. His green eyes and brown hair provide a perfect complement to his irresistible personality.