The first-ever Caucasian to be featured in the “Smooth Magazine,” Coco Austin is not only known for her figure but also for being the wife of Ice-T and classmate of Jessica Alba.

Known as Coco-T. Coco Marie Austin and simply Coco, Nicole Natalie Marrow, is an American actress, glamour model, dancer, and a web star. She stepped into the entertainment in 1994 as a model. She officially worked as a model in 1999 and became the winner of the Miss Ujena Competition in Mexico.

She has not only posed for calenders and catalogs but has also appeared in various videos. She had also worked in multiple parties and events, and she was discovered by the founder of playboy magazine, Hugh Hefner, in one such party.

In her early career, she was featured in low-budget R-rated movies due to her curvaceous figure.  Later she was approached by multiple television shows and specials. That’s how she entered Television. Her most notable work is in the Tv series “Law and Order: Special Victims Unit.”

Throughout her career, she has been featured in more than 50 covers of magazines, and in 2007 she launched her self-titled quarterly magazine. Besides, she published her first book, “Angel,” in 2011.  She was also a guest judge in RuPaul’s Drag Race season 3. She is also a skilled website designer and has her official website Cocosworld.com.

Her career doesn’t end here. She has also launched her clothing line, Licious, which offers swimsuits, dresses, and jeans for women of all sizes. With her impressive track record, people are often curious about her net worth.  As of date, her net worth stands at $5 million

Coco Austin is married to American rapper-actor Tracy Marrow, known as “Ice-T” They had exchanged their vows in Hollywood on January 2002 and had renewed their vows on June 4, 2011. The couple is blessed with a daughter named Chanel Nicole Marrow in November 2015.  Before ‘Ice-T,” she was married to Mike “Eddie” Williams. They had married on May 11, 1999, and their relationship had lasted till 2001.

Coco Austin was born in Tarzana, California, on March 17, 1979, to father Steve Austin and mother Tina Austin and grew up in Palos Verdes. Both of her parents were actors. She has a sister named Kristy Williams and three younger half brothers.  She has Serbian blood from her maternal side. She was a tomboy during her childhood and started dancing at the age of 6 and used to play various sports.

She was named Coco instead of Nicole when her brothers started mispronouncing her name.  When she was 10, her family moved to Albuquerque, New Mexico. She trained in various forms of dance and performed on multiple productions in New Mexico. 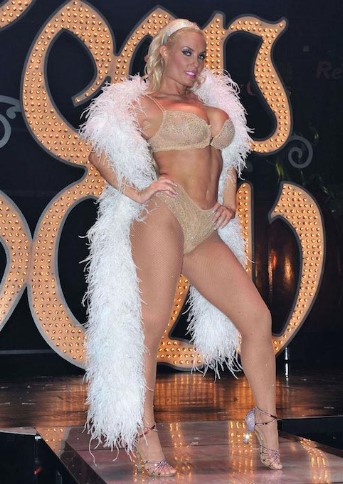 Coco stands at a decent height of 5 feet and 2 inches and weighs 62 kgs. The 40-year-old actress has always had a curvaceous figure, and her trademark feature is a large, uniquely shaped butt.  She has naturally brown hair, but she often bleaches her hair blonde. Her body measures 39-24-43 inches.