After over a year, Conor Mcgregor is back by defeating Donald ‘Cowboy’ Cerrone in less than a minute, the main event of UFC 246 on 18th January 2020.

The striking ability, signature spinning sidekick, and knockout via left punch is the perfect definition of the Conor McGregor gameplay. He is an Irish professional mixed martial artist and boxer who is ranked 4th in the UFC lightweight rankings and 13th in the UFC pound-for-pound ranking. He was also the former Cage Warriors featherweight and lightweight champion.

Conor was born on Crumlin, Dublin, Ireland, on the 14th of July, 1988. He belongs to the Cancer zodiac sign. Belonging to Irish nationality, he is the son of Tony and Margaret McGregor. Conor was raised with two sisters, Erin and Aoife. Talking about his education, he went to Gaelscoil and Gaelcholaiste, which are both primary and secondary levels in Tallaght.

Conor started training at the Straight Blast Gym under John Kavanagh after signing with the Irish Cage of Truth promotion in 2008. The same year, he made debut against Gary Morris and defeated in the second round with TKO. But, Conor lost via submission against Artmij Sitenkov in his featherweight debut. Then, he won against Connor Dillon and Stephen Bailey at Featherweight.

In February 2013, Conor signed multiple-fights for the Ultimate Fighting Championship (UFC). On 16th April 2013, he made his UFC debut by winning against Marcus Brimage by earning Knockout of the Night. Among his UFC career, he has played 26 matches with 22 wins and four losses. Conor won the game against Donald Cerrone by knocking out in 40 second in 1st round in the Welterweight division of UFC 246.

The notorious fighter in the UFC, Conor started his romantic dating life with Dee Devlin since 2008. Before getting tangled in love, they met when Conor was aged 19.

The couple has been in a relationship in more than 12 years. They have also welcomed their first child named Conor Jack McGregor Jr. on 5th May 2017. However, there isn’t any news about Conor and his girlfriend, Devlin getting married.

Conor was born in the McGregor family by possessing the Irish ethnicity. He is the son of Tan McGregor and Margaret McGregor. His parents raised him with his sisters named Erin and Aoife. He was raised in Crumlin and started developing a passion for the sport by paying in association football.

In his youth, Conor started playing for the Lourdes Celtic Football Club. Then, he began boxing at the age of 12 at the Crumlin Boxing Club. Afterward, he moved to Lucan, Dublin, by attending Gaelcholáiste Coláiste Cois Life with his family. During his time in Lucan, he met UFC fighter Tom Egan who inspired him to start training together in mixed martial arts (MMA). 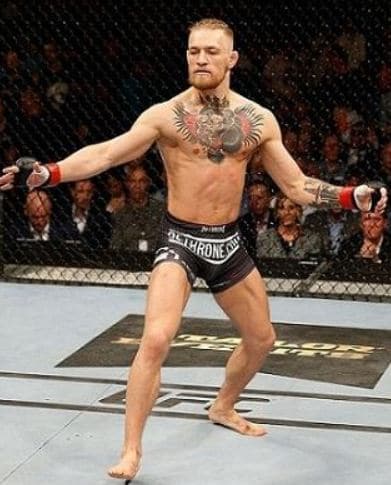 The notorious, Conor Mcgregor has the body measurement of 42in chest size, 32in waist size, and 15in Bicep size. Conor’s height stands at 1.75m, i.e., 5 feet 9 inches and weight at 70kg. For his comeback in UFC 246, he gained the weight to fight against Cowboy. He has blonde hair and a dark brown eye.

Published on 4 hours ago 3 min read