Danny Griffin is a British actor and model who plays Sky in the new Netflix’s dark-fantasy series Fate: The Winx Saga. Despite being relatively new to the acting industry, he has already established himself as a hardworking and talented actor. He made his first on-screen appearance in 2017.

Originally from Kensington and Chelsea, London, Danny Griffin was born on 02 July 1997, making him a Cancer. His birth name is Daniel Patrick Griffin. The 23-year-old actor is British by nationality and belongs to white/caucasian ethnicity. He grew up in Cornwall but moved back to London at the age of 17 to study acting.

Griffin landed his first professional acting gig in the 2017 Netflix drama Free Rein, where he played a guest role of Danny. The same year, he appeared as Maciej in the film Surviving Christmas with the Relatives. In 2019, he played Aslan in The Gentlemen alongside Hugh Grant and Matthew McConaughey. He also made a guest appearance as Hunter Phillips in the TV series So Awkward.

Griffin made his second appearance on Netflix’s original TV Series in 2020 with the drama Get Even. He landed his major breakthrough role in the teen drama series Fate: The Winx Saga, which premiered on Netflix on 22 January 2021. He plays Sky, son of the late Andreas of Eraklyon, in the series.

Apart from acting, Griffin also works as a model and is signed to IMG Models. Besides, he is an avid horse rider. He has been riding a horse since he was 11 years old.

The young actor is new to the spotlight as he only played minor roles in films and TV series before Fate. His journey to climb the ladder of the showbiz industry has just started. With a few movies and TV credits to his name, Griffin has accumulated a handsome net worth. According to various reports, his net worth is estimated at $250 Thousand.

The new Netflix heartthrob has a breathtaking personality, admired by thousands of female fans. The actor is available on Instagram, where he mostly features professional shots from his second career as a model and a few snaps of himself with horses. Meanwhile, his Instagram feed suggests that he is not in a relationship with anybody at present.

That being said, Griffin may be keen to keep his love life private. Or, he could be looking for someone perfect to him.

Griffin has kept his family life private. He grew up with his sisters in rural Cornwall. Throughout the COVID pandemic, he lived with his grandparents in Hampstead. 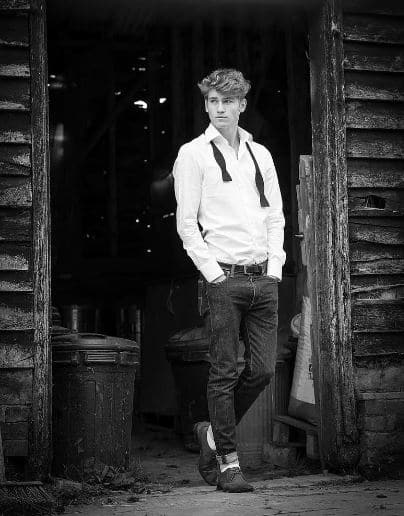 Griffin stands tall with a dashing personality. He has a decent height of 6 feet 1 inch and weighs around 60 kg. His blond hair and blue-ish green eyes provide a perfect complement to his signature jawline and dazzling looks.