Honored by the Hershey Company as one of the four “Sensational Women” in 2006 for her support in breast cancer awareness, DeLana Harvick is not just a celebrity wife but also an influential figure herself.

DeLana Harvick is well-known as the wife of 2007 Daytona 500 winner NASCAR driver Kevin Harvick and is the former co-owner and manager of Kevin Harvick Inc. Besides her husband, she has also worked with other well-known drivers, namely Randy LaJoie and Jeff Gordon. She is also a philanthropist, and her Foundation “Kevin Harrick Foundation” supports various charity funds and scholarships.

DeLana first started as a publicity team member of Jeff Gordon, and sometime later, she worked with Randy LaJoie.  After marrying her husband, she became her husband’s manager and worked for Kavin Harvik Inc. In September 2011, she announced that the Inc. was being sold to Richard Childress, owner of Richard Childress.

She and her husband has recently sold their vacation home in Kiawah Island, South Carolina, in $8.2 million, which was initially worth $6.4 million. They had sold their Kernersville 11,430 square feet mansion for $2.3 million. Currently, they stay at their residential building in Charlotte. She is actively involved in the Kevin Harvick Foundation as of the date and holds various games and tournaments and fund charity projects.

She had made some bucks from the sales of her shirt, which said: “I Wear the Firesuit in This Family.”  With income from her previous jobs and former company as well as the sales of two houses, she has collected a handsome income. Her net worth as of 2020 stands at $17.9 million.

DeLana is married to NASCAR racer Kevin Harrick. They got married on February 28, 2001, in Las Vegas, Nevada. They had first met in 2000 during a race held at Michigan International Speedway. Post marriage, they lived together in Kernersville, North Carolina, and later relocated to Charlotte. The couple is blessed with a son named Keelan Paul Harvick, who was born on July 8, 2012,  just after Kevin had finished racing Coke Zero 400 in Daytona. Their daughter Piper Grace Harvick was born on December 28, 2017.

DeLana Harvick was born on July 7, 1973, in North Carolina, United States, to the NASCAR veteran father John Paul Linville and mother, Joyce Linville.  She has been familiar with the race track since she was three years old.  She did her high schooling in North Carolina itself and later attended the University of North Carolina-Greensboro and obtained a degree in English. She wanted to be a teacher, but her life led her to the race track. 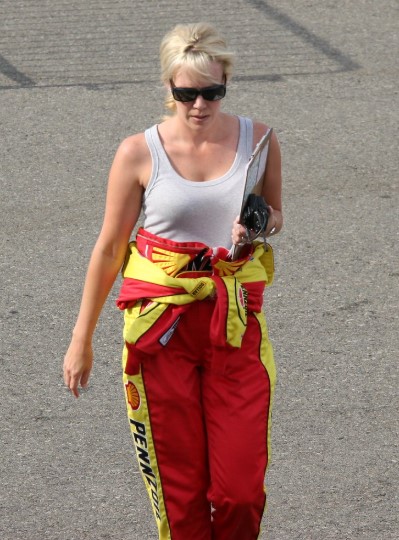 The 46 years old blonde beauty possesses a pair of enticing blue eyes.  Her actual height, weight, and body statistics are unknown, and we will update it on a later date.