Diggy Simmons is a rapper, singer, songwriter, model, and actor who appeared on the MTV reality television show Run’s House. Likewise, he is also popular for playing the role of Douglas Fredrick on the hit show Grown-ish. As a rapper, Diggy has released two albums and various mixtapes.

Diggy Dwayne Simmons III was born in 1995 in Queens. New York, US. He celebrates his birthday on March 21, which makes his age 26. He holds American nationality and comes from African-American ethnicity.

Diggy Simmons made his debut releasing his mixtape, The First Flight, in 2009 and 2010 released a video of himself freestyling over a Nas song, which went viral. Likewise, after releasing his second mixtape, Airborne, the rapper released his third mixtape, Past, Present, Future, in the December of the same month. Since then, he has released two albums, Unexpected Arrival in 2012 and Lightens Up in 2018. 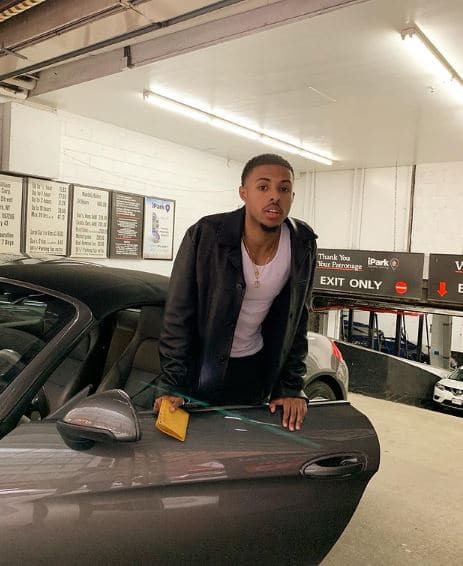 Besides rapping, Diggy has also ventured into acting and made his TV debut on the MTV show “Run’s House.” Likewise, he also had a small role in the 2012 Parental Guidance. Besides, he also landed his own 2-hour TV movie/show pilot on BET titled The Start-Up. Moreover, he also has a recurring role on the TV series Grown-ish, where he plays Doug. In 2010, the rapper also started a line of urban sneakers called Chivalrous Vulture, which he later discontinued. As of 2021, Diggy holds a net worth of $3.75 million.

Diggy’s relationship status has often been a mystery for many of his fans due to his secretive nature. However, his role in the Grown-ish has sparked various rumors over the years. As he plays the love interest of Chloe Bailey in the show, many viewers assumed the pair to be in a relationship. They were speculated to be dating in 2019. However, Chloe put the rumors to rest when she mentioned being single in an interview in 2020.

Regardless, it has not stopped few fans from linking the couple. On the other hand, neither of them has ever confirmed dating each other. Diggy’s social media also does not hint at him being in a relationship at the moment. The rapper seems to be single and seems to be focusing on his career at the moment.

Diggy was born to his father, Joseph Simmons and Justine Simmons. His father is a rapper, producer, DJ, and TV personality who is best known as one of the founding members of the hip-hop group Run-D.M.C.

His family also includes two siblings, Russel Simmons II and Victoria Anne Simmons. Victoria passed away shortly after being born in 2006.  Likewise, he has three half-siblings from his father’s first marriage.

Diggy has a height of 5 feet and 8 inches. The rapper has a slim built-fit body. His facial features include his short black hair and black-colored eyes.