Dulce Candy is a YouTuber who uploads make-up videos and advertise numerous top beauty brands in DulceCandy87. But before creating an empire of 2.18m subscriber in her channel, she was a veteran served in the Iraq war. Also, she has her other channel named DulceCandyTv where she shares random vlogs that talk about her life and family.

Dulce Candy was born in Zacapu, Mexico in 1987. Her birthday falls on every 20th of August which makes her zodiac sign Leo. She inherits the nationality of American and Mexican and possesses the Mexican ethnicity.

Dulce first joined the military high school in 2006. There, she served in the Army and spent in Iraq for 15 months as a mechanic and military driver. She gained honor by the safeguarding VIPs into the Green Zone amidst the war. 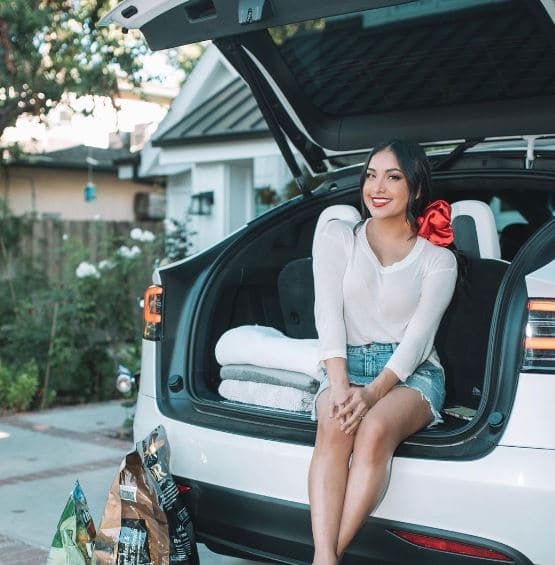 In 2008, Dulce started her YouTube channel named Dulce Candy which has over 2.18m subscribers. On her channel, she uploads makeup tutorials, fashion advice, and DIY. Besides that, she runs the second channel called DulceCandyTV where she shares her personal vlogs. The channel was started on the 2nd of December 2009 which has over 306k subscribers.

Dulce is a married woman who tied to wedlock with her husband, Jesse Ruiz in 2011. The same year, the couple welcomed their first child, a son named Izek.

The couple’s love story began when they met and served together in the Army. Moreover, her husband often appears in her YouTube videos.

Furthermore, Dulce astonish her fan with pregnant news and shared 23 weeks belly with the second child via Instagram. She even flaunts her baby’s arrival by showcasing the new clothes from the patpat kids’ clothes on the 23rd of April 2020. She further captioned it

I’ve been getting everything ready for our little boys’ arrival (in less than a month!)

As you all know I’ve been very open with the ups and downs of my breastfeeding journey. I Iearned that the first six months are critical for establishing your baby’s digestive health, especially babies born via c-section like my Aaron. This is why I was confident in my decision in choosing @gerber Good Start GentlePro Formula as a supplement. It was designed to promote digestive health and immune system support! A happy and healthy belly means a happy and healthy baby! #AnythingforBaby #TheVillageByGerber #ad

The couple resides with their children in Los Angeles, California.

Dulce was born as Dulce Candy Tejeda Ruiz. At the age of 6, she migrated illegally from Mexico to the U.S. in 1994. She shared the obstacle her mother faced while she and her four daughters were coming to California. Dulce said she had to swim across a river and climbing fences along the way, and eventually made it to Oxnard. Later, she got reunited with her father, who was a farm laborer.

Though they came to the US, growing up wasn’t easy as it sounds like Dulce had a rough childhood. She grew up in a trailer park.

In 2015, Dulce shared her garnering a degree in fashion in an interview. She suffered from depression in high school and even attempted suicide during high school days.

Dulce has a height of 4 feet and 8 inches but her weight remains secluded. She has brown hair and brownish eyes color.