Eduardo Garcia is an American chef and co-founder of the food brand ‘Montana Mex.” He cooks with a prosthetic arm and is dubbed the “bionic chef.” With specialized prosthetics, Garcia still pursues his passion and proves that anyone can accomplish anything.

Originally from Bozeman, Montana, Eduardo Garcia was born in 1981. The 41-year-old celebrity chef is American by nationality and belongs to the Caucasian ethnicity. He attended The Art Institute of Seattle, a culinary school, from 1999-2000 after graduating from high school.

Eduardo Garcia Net Worth and Salary

During college, Garcia worked at a Japanese cafe called Saitos. Upon graduation, he spent two and half years working as a chef of a 107-foot yacht called Dorothea. For 11 years, he toured the world as a chef on various yachts, learning different ethnic cuisines along the way. 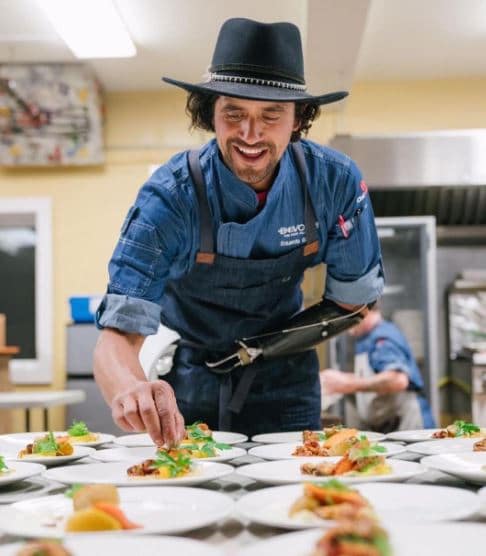 In 2010, Garcia co-founded his own company Montana Mex, a Mexican-inspired line of flavored salts, hot sauces, and salsas. In late 2011, he lost his left arm after receiving a severe electrical shock on a hunting trip. He was then fitted with a prosthetic hook, and later with a bionic hand in September 2013.

Garcia’s recipes have appeared on HGTV.com, Latina.com, and Refinery29. His documentary feature film Charged: The Eduardo Garcia Story was released in 2018. Besides, he has appeared as a guest judge on Chopped. He is also a motivational speaker, outdoor enthusiast, and athlete.

The bionic chef has earned a hefty sum of money from his professional cooking career and his food company, Montana Mex. As of 2022, Eduardo Garcia has an estimated net worth of $2.5 million.

Garcia is happily married to his wife, Becca Skinner. His wife is a NatGeo explorer, photographer, writer, and conservationist.

Garcia tied the knot with his beloved wife in July 2019. His wife revealed that she knew Garcia was the one she would marry in just three months of dating.

Garcia has an inseparable relationship with his wife. They haven’t welcomed any children yet.

Garcia’s father, Manuel, was a fisherman and chef. His mother was an astrologer, author, and Montessori teacher. His father left him and his two siblings – sister Ellie and twin brother Eugenio – behind to go back to Mexico and fish.

Garcia didn’t meet his dad until he was 13. Unfortunately, his father passed away in 2017.

Garcia stands tall at a height of 5 feet 10 inches. He has a fit, healthy body that weighs around 72 kg. He has bright hazel eyes and thick dark hair.

Eduardo Garcia lost his left hand in an accident involving electrocution while hiking. Before the accident, he claimed that he had dozen of surgeries and various medical complications.

How old is Eduardo Garcia?

What is Eduardo Garcia’s net worth?

Is Eduardo Garcia dating someone?

Eduardo is a married man, so is not dating someone.

Who is Eduardo Garcia’s wife?

Eduardo is married to his wife, Becca Skinner.

How tall is Eduardo Garcia?