Famous Ocean is a rising rapper and social media personality who uses YouTube and SoundCloud to promote her music. Besides, she is famous as one-third of the trio Hollywood Dollz. She is also popular by the pseudonym Kayla J-LA.

The United States-native Famous Ocean was born on 08 October 2002 under the star sign Libra. The 18-year-old rapper is American by nationality and belongs to African-American ethnicity.

Ocean had an interest in rapping from an early age. She started rapping when she was a kid and began to pursue music professionally before stepping into her teenage years.

Initially, Ocean began uploading her freestyle rap videos on TikTok and used SoundCloud to release her music. In 2017, she formed a group Hollywood Dollz with her two sisters and released their debut track Too Cute on SoundCloud. Later, the three sisters switched to YouTube to reach more audiences. 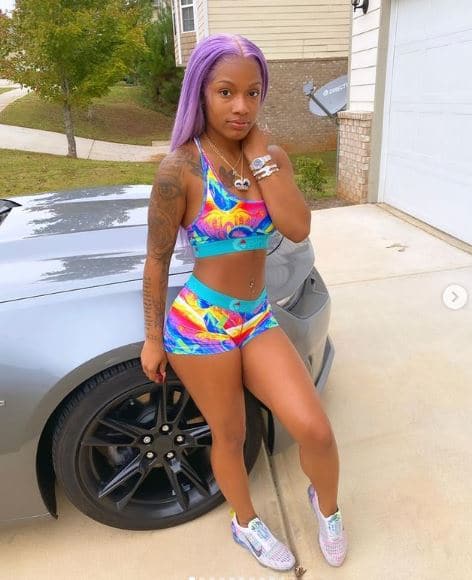 On 12 September 2017, Ocean and her two sisters uploaded their first track called Big Ole Flex. She then released her debut solo freestyle So Groovy, which attracted more audiences. Since then, she has uploaded music videos of her other tracks such as No Smoke, Savage, and Get Active.

Ocean earns quite a sum of money from her singles and contents on social media channels. As of 2020, the rapper has an estimated net worth of $500 Thousand.

The one-third of Hollywood Dollz is currently in a relationship with an American singer-songwriter Turran Coleman. Her boyfriend is professionally known as Luh Kel.

Ocean began dating YouTube star Kel in April 2020. On 25 December of the same year, she even wished her boyfriend their eight anniversary through Instagram.

Previously, Ocean dated Instagram star Chris Gone Crazy. She began dating him back in 2018 and ended their relationship in May 2019.

Her elder sister, Hollywood, is famous by the name Kung-Fu on social media channels. Likewise, her younger sister, Stacie, is well-known as SuperstarrStacie.

Ocean has a decent height of 5 feet 4 inches. She has well-maintained her body that weighs around 55 kg. Her black hair and dark brown eyes add more to her beauty.