Folarin Balogun is a professional footballer who plays as a striker for Arsenal, wearing jersey no. 26. He has represented both England and the United States at the international level. He signed a new long-term contract with Arsenal in April 2021.

Originally from New York City, New York, Folarin Jerry Balogun was born on 3 July 2001 under the star sign Cancer. The 20-year-old footballer is British by nationality and belongs to the Nigerian ethnicity.

Balogun joined Arsenal at the age of eight. Before, he was playing for the Sunday League side, Aldersbrook. He signed a professional contract with Arsenal in 2019 and made his senior debut in the Europa League on 29 October 2020. 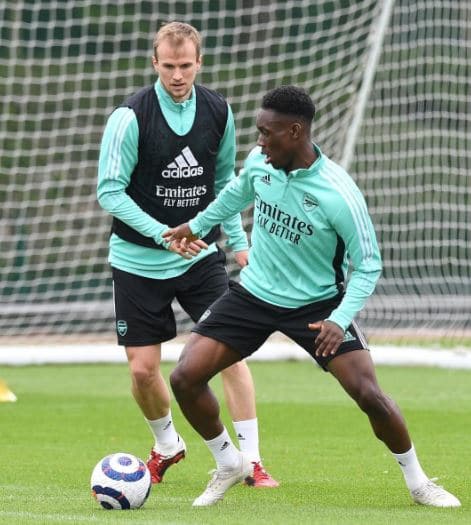 Balogun scored his first senior goal in a Europa League match against Molde on 26 November 2020. He signed a new long-term contract with Arsenal on 26 April 2021. He made his Premier League debut against Brentford on 13 August 2021.

The 20-year-old striker played for England at the under-17 level and appeared in the 2018 UEFA European Under-17 Championship. He then played in all four of the United States’ games in the Vaclav Jezek Youth Tournament and scored twice. In 2019, he scored for the England U18 national team in a tournament in Dubai. He made an appearance for the England U 20 against Wales in October 2020.

Balogun rarely talks about his personal life. He is not much active on social media as well. To date, he has only made 12 posts on Instagram, and all the posts reflect his professional work.

So, it’s unclear whether the Arsenal forward has a girlfriend, or he is single.

The New York-born striker was born to Nigerian parents. His family migrated to England when he was only two years old. It’s unclear whether Balogun is the single child of his parents or he has siblings.

Balogun stands tall at the height of 5 feet 10 inches. As a footballer, he has a fit, athletic body that weighs 73 kg. He has short black hair and dark brown eyes.