Giada De Laurentiis is a chef, writer, and television personality who earned popularity working in Food Network. She has had many shows on Food Network over the years. Besides, she has also bagged Daytime Emmy Award and the Gracie Awards. However, there is much to learn about Giada, including her net worth, husband, divorce, partner, and much more.

Giada Pamela De Laurentiis was born in 1970 in Rome, Italy. She celebrates her birthday on August 22, which makes her age 50. She holds American nationality and comes from White ethnicity. Giada studied at Le Cordon Bleu in Paris.

Upon her graduation, Giada started working in several local restaurants before working as a food stylist. She soon attracted the attention of Food Network, and she earned the opportunity to have her own show, “Everyday Italian,” which premiered on April 5, 2003. In 2006, she hosted the show “Behind the Bash.” Her third show came in January 2007 on Food Network named “Giada’s Weekday Getaways.” Her other shows include Giada at Home and Giada Entertains.

Besides, the chef has also made appearances on Iron Chef America, Giada in Paradise, The Next Food Network Star, Handy Manny, Pixie Hollow Bake Off, Scooby-Doo! and the Gourmet Ghost. Apart from TV work, Giada has opened few restaurants, Giada in 2014 and Pronto by Giada in 2018. Her third restaurant, GDL by Giana, was opened in 2018 in the Horseshoe Casino Baltimore. As of 2021, Giada De Laurentiis holds a net worth of $30 million.

Giada was first married to a fashion designer, Todd Thompson. The pair started dating when Giada was 19 years old. At the time, Giada was an anthropology student at UCLA. They tied the knot on 25th May 2003. Likewise, after five years of marriage, the pair was blessed with Hade Marie De Laurentiis-Thompson, born on March 29, 2008. Nonetheless, Giada’s marriage quickly turned sour, and in 2011, the chef revealed the problems in her marriage. She announced that the pair have separated on her website in 2014. Their divorce was finalized on September 3, 2015.

After the divorce, Giada quickly found romance with the TV producer Shane Farley. They had first met in 2013 after Shane hired her for a talkshow featuring Giada and Bobby Flay. The pair started dating in August 2015. The news of their romance came into the light after they were spotted kissing at Nick Jonas’s concert in Mexico. Giada’s current partner has been married and divorced three times. Nonetheless, Giada has featured her boyfriend several times on her social media. However, there has been no news of the pair tying the knot.

Giada was born to her parents, Veronica De Laurentiis and Alex De Banedetti. Her mother is an actress who has appeared in the movie Waterloo. Likewise, she also has a sister, Eloisa, a make-up artist, and brothers, Igor and Dino Alexander II. After her parent’s divorce, Giana moved to Southern California with her mother and siblings and took their mother’s surname. Her mother remarried to a producer, Ivan Kavalsky. 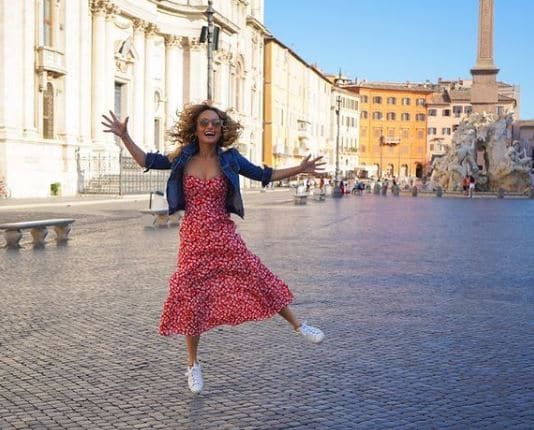 The beautiful chef has a height of 5 feet and 1 inch. Likewise, she has a well-maintained body. Giada possesses blue-colored eyes and blonde hair.