Hitman Holla is a rapper, singer, social media influencer and entrepreneur. He is best known for his rap battles and energetic rap songs. He has battled many famous rappers and has performed in Fight Klub, Battle America, etc. Moreover, he is also well-known for his TV appearance on Wild ‘N Out. Regardless, Hitman Holla faced tragedy when his girlfriend was shot during a burglary. Learn more on the rapper, including his dating life, net worth and much more.

Gerald Fulton Jr. was born in 1988 in St. Louis, MO. He celebrates his birthday on March 29, which makes his age 33. He holds American nationality and comes from African-American ethnicity.

Hitman Holla started his rapping career as a former college athlete. Likewise, he started battle rapping in 2008 and went against RemyD. Similarly, he made a name for himself in the battle rap circuit and became known for ending every round with words like “ball games” and “yet yett”. Moreover, he was also part of Battle American Fight Klub.

Nonetheless, he started earning popularity after joining the cast of Wild’ N Out in season 6 in 2015. He was the second battle rapper to join the show. In 2017, the rapper released his single “Diddy Dum Dum”, featuring rapper Jeff. Moreover, he also appeared in the independent film She Ball, directed and co-written by Nick Cannon. As of 2021, Hitman Holla is estimated to hold a net worth of around $500k.

Hitman is in a relationship with his girlfriend, Cinnamon. Likewise, his girlfriend has her online shopping and retail store called CINNY. Moreover, she also has a cooking business called Cinny’s Food and has over 277k followers on her Instagram. Unfortunately, the pair went through a tragedy in October 2021. The duo was face timing when four burglars broke into Hitman’s girlfriend’s house and shot her. The rapper’s girlfriend was immediately rushed to the hospital after a bullet went through her cheek and out the back of her head.

The rapper announced the news on social media writing,

“Imagine being on FaceTime while ya girl while being outta town & shes telling u it’s ppl in the house at 1 in the morning so coaching her on what to do 1000 miles away.

“She showed courage & let off shots defending her home.

“I’m so proud of how she was so brave… I can’t stop crying man plz send positive energy our way I need it y’all I really really need it I’ve never felt this kinda pain this message was for my fans family and friends all at once plz help us get through this.”

Besides, his girlfriend also shared her appreciation on Instagram for the support of her family and friends. Regardless, the rapper also shares a son named Geremiah Fulton, born in 2006, from his past relationship.

Hitman was born to his father, Gerald Fulton Sr. and mother, Sue Fulton. His father is very supportive of his rap career. Likewise, he also has a brother who goes by the name Showout. 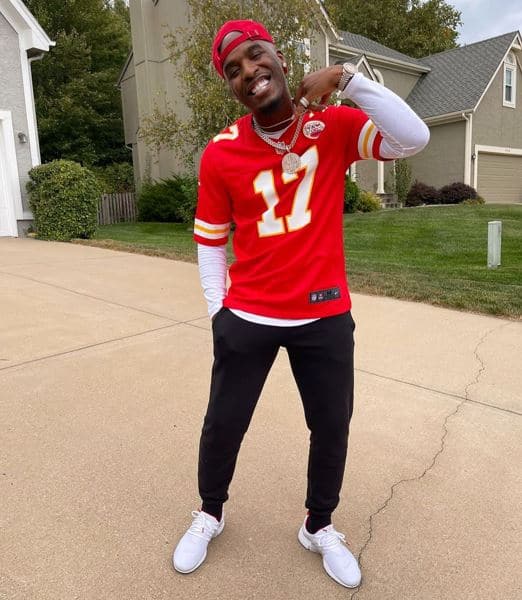 Hitman stands at the height of 5 feet and 10 inches. Likewise, he has a healthy and fit body.