Hubert Hurkacz is a current Polish No. 1 professional tennis player and is ranked No. 18 on ATP rankings. He is the first player from Poland to win an ATP Masters 1000 singles title, which he did at the 2021 Miami Open. On 9 July 2021, he will face 7th-seed Matteo Berrettini in the semifinals.

Originally from Wroclaw, Portland, Hubert Hurkacz was born on 11 February 1997 under the star sign Aquarius. The 24-year-old tennis player is Polish by nationality and belongs to the Caucasian ethnicity.

Hurkacz played in the main draw event at the 2018 French Open and defeated Tennys Sandgren in the first round, which marked his first victory at a Grand Slam and an ATP main draw event. In August 2018, he made his US Open debut, and the next month, he played at the 2018 Next Generation ATP Finals held in Milan. 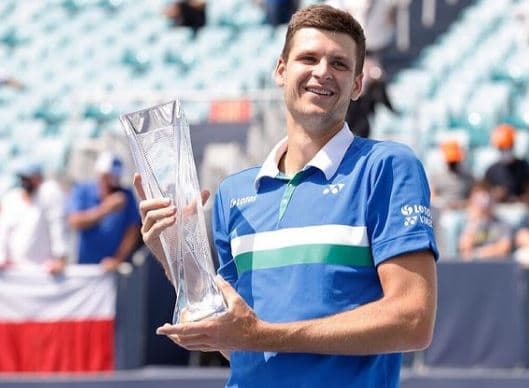 Hurkacz started the 2021 season at the 2021 Delray Beach Open, where he was seeded 4th. In the final, he defeated Sebastian Korda to win his second ATP title. He reached the quarterfinals in both singles and doubles at the 2021 Great Ocean Road Open in Melbourne, Australia. In March, he participated in the 2021 Miami Open and won his first Masters 1000 title and third ATP title.

On 5 April 2021, Hurkacz entered the top 20 for the first time and reached a career-high ranking of No. 16. At Wimbledon, he defeated Lorenzo Musetti, Marcos Giron, and Alexander Bublik and reached the fourth round for the first time at a Grand Slam in his career. In the fourth round, he defeated Daniil Medvedev and reached the quarter-finals. He then defeated eight-time Wimbledon champion Reger Federer in the quarterfinals and became only the second Polish man in history to reach the semifinals at a Grand Slam. He will face Matteo Berrettini in the semifinals.

Hurkacz has earned $3.311 million as prize money throughout his career. He has also supplemented his income through endorsements. As of 2021, his net worth is estimated at $2 million.

It does not appear as if the tennis player is in a relationship, and he has not shared a photo online to suggest that he is. Because he leads a life in the public eye as a result of his work, there’s also every chance that he is keeping some of his personal life private.

Hurkacz comes from a family of athletic backgrounds. His mother, Zofia Maliszewska-Hurkacz, was a junior tennis champion in Poland. His grandfather was a volleyball player at an international level, and both his uncles were tennis players. It was his mother who introduced him to tennis. His mother and father, Krzysztof, were his first teachers.

Hurkacz has a younger sister, Nika, who is ten years his junior. She also plays tennis and hopes to be a professional.

Hurkacz has a towering height of 6 feet 5 inches. As an athlete, he has a fit body that weighs around 179 lbs. He has black hair and dark brown eyes.