Jacob Mayo is a baseball player who plays at the intercollegiate level. He rose to stardom after getting engaged to the Duck Dynasty alum Bella Robertson, who is a daughter of the show’s stars Willie and Korie Robertson.

The 21-year-old Jacob Mayo was born in West Monroe, Los Angeles. He is American by nationality and belongs to the white ethnic group. He attended St. Frederick High School where he played baseball under Joey Lee. Later, he enrolled in the University of Louisiana-Monroe where he spent the 2018 fall semester under Michael Federico.

Mayo is a baseball player who hasn’t yet started his professional career. However, he is good at playing baseball and is a two-time all-district recipient. After his senior season, he was named to All-Northeast Louisiana team.

Before the 2018 campaign, Perfect Game chose Mayo as a preseason All-American. He was also named to the school’s National Honor Society. He also played for the Mississippi Delta Trojans and Bossier Parish Community College. 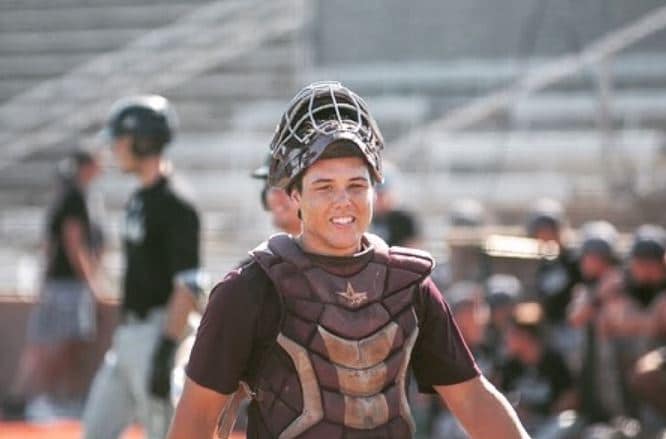 As Mayo still plays for the college, his income and net worth are unaccessible. However, he runs a merch called ‘General Vintage.’

At just the age of 21, Mayo is already committed to a relationship and engaged with his girlfriend of six months, Bella Robertson. His fiancee, Bella, is an 18-year-old Duck Dynasty alum and the daughter of the show’s stars Willie and Korie Robertson.

After dating for six months, Mayo popped the question to his girlfriend, Bella, over Thanksgiving weekend. The pair took to Instagram to announce the engagement news on 28 November this year.

Mayo shared several pictures on Instagram, where he can be seen proposing and kissing his girlfriend-turned-fiancee. He wrote:

“Engaged! Bella is many things to me. She is my best friend. She is the person I can lean on in any problem with no judgment. But with the honest truth when I’m acting out. She loves Jesus. She holds me to a higher standard that she doesn’t let waver. She unconditionally loves me whether I’m doing what she likes or the opposite side of the spectrum. She’s the one for me forever. She’s my everything. I thank God for her.

Bella also shared a picture of the two where she wrote:

Bella’s parents are excited about their daughter’s engagement. Her sister, Sadie Robertson, one of her five siblings, also shared photos of the engagement party on her Instagram.

As Mayo and his fiancee, Bella, are excited about getting married, they have yet to decide the wedding date.

Mayo was born to parents James Preston Mayo and Deon Soignier. His parents are now divorced, and both of them have married another partner. His mother Deon has married a man named Dale Soigner. As of 2020, Deon, a University of Louisiana graduate, was with Ouachita Parish School System.

Mayo has an elder sister named Kaylea and a brother name Trace Mayo. He is a family man as he often posts throwback photos of his parents and siblings on his social media channels.

Mayo is quite tall as his height measures 6 feet. He has a medium build body that weighs about 194 lb.  His athletic body still has room to continue to add strength and fill out physically. He has light brown hair.