Jadyn Rylee is an emerging Canadian singer whose vocal covers and original songs on YouTube have racked up over 396k subscribers. She has even ventured into the acting industry and landed a starring role in her debut film Flag Day, directed by Sean Penn. According to her Instagram bio, she has started modelling as well.

Originally from Toronto, Canada, Jadyn Rylee was born on 14 February 2006 under the star sign Aquarius. The 14-year old singer is Canadian by nationality and belongs to the white ethnic group.

Rylee had an interest in music from a very early age. At just the age of three, she first learned a song by Miley Cyrus called The Climb. Her family soon realized her talent in singing and made her take vocal lessons from the age of six.

In 2015, Rylee’s parents created a YouTube channel under her name, where she started uploading cover songs and later original too. Some of her most viewed vocal covers on YouTube are songs such as The Sound Of Silence, Nothing Else Matters, My Immortal, and Stairway To Heaven.

Rylee travels to Nashville, Tennessee to record most of her original songs with Curt Ryle of Big Matador Recording. In June 2019, she released her first original album called Voice of Change. She also had a starring role in the Sean Penn-directed drama film Flag Day. 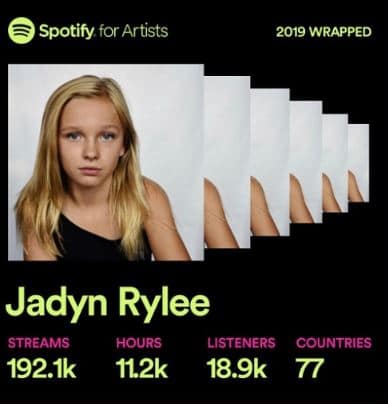 At just the age of 14, Rylee has racked up 349k subscribers on YouTube with more than 72.5 million views, released an original album, toured with the Minipopkids, and landed a starring role in the Sean Penn-directed film. She is a rising star who has already accumulated thousands of net worth. As of 2021, Rylee’s net worth is estimated at $500 Thousand.

As Rylee is just 14, she hasn’t matured enough to have a boyfriend or go on a date with someone. At present, she is busy focusing on her studies, making vocal covers and originals songs, and enjoying free time with friends and family.

The aspiring singer was born to parents Tara Giles and Colin. Her parents are very supportive of her career choice, and they are the ones who handle her social accounts.

The teen singer has a decent height of 5 feet 1 inch and weighs around 37 kg. Her blue eyes and blonde hair provide a perfect complement to her adorable looks.