Which is the most famous band in South Korea? BTS, it is. The Bangtan Boys ranks on the top of the list, with the genre of hip-hop and pop. Jin, who goes by different nicknames like Visual King, Third One from The Left, and Prince Jin is one of the best singers in the group. He planned to join his father’s company, but his appearance widely praised him, and talent agencies approached him. The first offer was from SM company, but he refused to join. Now let’s know more about him including his dating life, net worth, and facts through this wiki!

Born on 4th December 1992, Jin’s hometown is in Gwacheon, South Korea. His real name is Kim Seok-jin, and Hangul is 김석진. His zodiac sign is Sagittarius and is South Korea native. He is associated with Big Hit Entertainment for the band BTS. He debuted as one of the members on 13th June 2013 from ‘No More Dream’ track. The information regarding his parents, family, and siblings are confined.

Jin entered the singing field in the year 2013, from the track ‘No More Dream.’ Since then, he is working as main visual handler and vocalist for BTS band. It’s already been more than four years, and he has contributed to a good number of music videos and events.

The wiki source mentioned him to be the youngest child in his family. He has a sibling older brother, of whom information is not disclosed. Also, data and name of his parents is a mystery.

Although we have little information about his family, we know that his parents are very much supportive of his singing career. In one of his concert, he cried because his parents attended the show. So, he sang ‘Mom’ song in the year 2015, Parents Day.

His stage name Jin best knows Kim Seok-jin. But, he has more than one nickname. The Wikipedia source mentioned ‘Third One from The Left’ because he always sits on the third while taking pictures. And because of his work in the band, he is known as Visual King.

His lifestyle is known to the world, thus has another name ‘Sexy guy who cooks well.’ He goes by other names like Worldwide Handsome, Jinpaca, Prince Jin, Maknae, and more.

Well, good news for those who want to try their luck, as our K-pop star is single. As all the band members are pretty busy now, they hardly have time spending for a relationship.

But in an interview, he mentioned how his future girlfriend or wife should be like. When asked about his girlfriend, he said that his ideal girlfriend’s image is chubby. As Lee Guk Joo was close to Jin, the rumor of both seeing each other came out. But the buzz fade away after Guk Joo cleared herself.

On MBC’s Radio Star program, Gook Joo made a statement about her relationship with Jin:

‘I did date someone who was a trainee in the past. He was six years younger than me. My ex-boyfriend was very handsome idol trainee on a broadcast.’

‘There’s a person who I have been close to for over four years, and I even cheered him on at Music Core when he debuted. He is BTS’ Jin.’

‘It’s definitely not Jin to be the one I dated before. He said his ideal girlfriend to be chubby. I am like a fat pig, but they describe me as chubby. Everything depends on how people perceive.’

The year 2017 was full of Jin’s dating rumors. Another hit topic was his alleged relation with Twice Sana. The news started rising when some photographic evidence came out.

In this picture, both were seen making the same expression on the stage. Like this, there were other pictures and videos of how their eyes met on stage, and how he copied the way she practiced for the event and so on. But all in all, the rumor came out to be just another rumor. 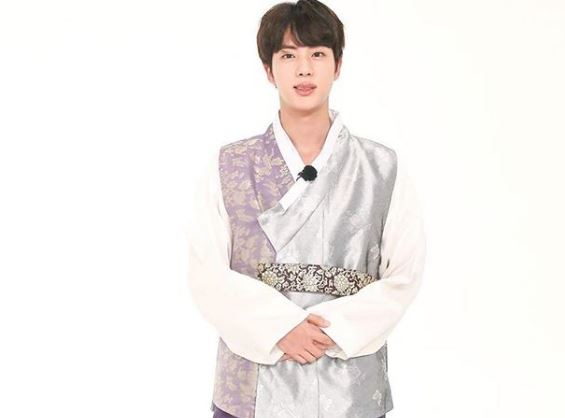 Jin is quite tall with the height of 5 ft 10 inches and weighs 63 kilos. His body type is slim. His blood group is O. The exact body measurement including his chest, waist, and inseam is not disclosed yet. His hair is brown, and eyes are grayish brown. His shoulder is broad measuring 23 inches.