Joe Willock is an English professional football player who plays for the English football club Arsenal as a midfielder. He is a youth product of Arsenal and will likely join Newcastle in the 2021-22 season as Newcastle have agreed to a fee with Arsenal in excess of £20m to sign him.

Originally from the London Borough of Waltham Forest, Joeseph George Willock was born on 20 August 1999 under the star sign Leo. The 21-year-old professional footballer is British by nationality and belongs to the Afro-Caribbean ethnicity.

Willock joined Arsenal at age four and a half. He made his first-team debut for Arsenal on 20 September 2017 in the EFL Cup against Doncaster Rovers. On 15 April 2018, he made his Premier League debut against Newcastle United.

Willock signed a long-term contract with Arsenal on 12 September 2019. He scored his first Premier League goal in a 2-0 win over Southampton on 25 June 2020. On 1 February 2021, he joined Newcastle United on loan for the remainder of the 2020-21 season. On 6 February, he scored a goal in the 16th minute on his debut for Newcastle against Southampton.

At age 21 years and 272 days, Willock made a record, scoring six consecutive league games by the youngest player in Premier League history. He has also represented his country in U-16, U-19, U-20, and U-21 teams. 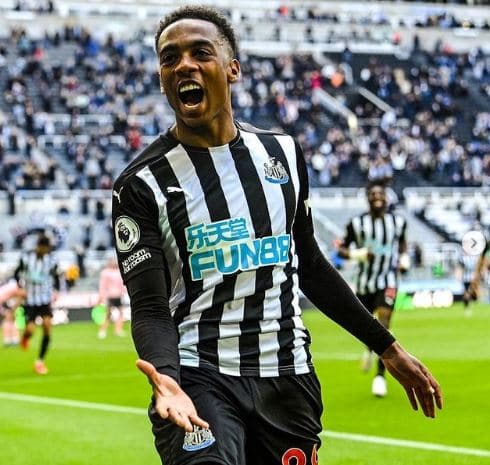 As of August 2021, Willock is reportedly single. To date, he hasn’t announced being in a relationship with anyone. His social accounts are also void of his possible romantic affair.

Though his relationship status seems to be single, Willock made headlines in January 2019 after he scored with French model Eglantine Flore Aguilar.

Willock was born as the youngest and third child to his parents. He has two older brothers Chris and Matty. In May 2017, all three brothers shared a pitch when Manchester United played a reserve game against Arsenal.

Willock has family roots from Montserratian, a British Overseas Territory, and Island in the Caribbean. His parents often struggled to raise their three sons.

Willock stands tall at the height of 6 feet 1 inch. As a football player, he has a fit, athletic body that weighs 71 kg. He has black hair and dark brown eyes.