American actor, producer, and director, John Krasinski rose to notoriety with his roles in the movies like Big Miracle and 13 Hours: The Secret Soldiers of Benghazi. He got nominated for two Primetime Emmy Awards and Screen Actors Guild Awards. Additionally, John got named as one of the 100 most influential people in 2018. With his popularity, John has around 1.9 million followers on his Twitter account.

John was born in Boston, Massachusetts, the USA on 20th October 1979. He is of American nationality, possesses white ethnicity, and his birth sign is Libra. John’s mother, Mary Claire, works as a nurse and his father, Ronald Krasinski is an internist.

John began his professional career as a scriptwriter on the show Late Night with Conan O’Brien. He was acknowledged for his performance in NBC sitcom The Office (2004). In 2008, John was seen alongside George Clooney and Renée Zellweger in Leatherheads. The following year, John made his directorial debut with the drama movie, Brief Interviews with Hideous Men.

In his illustrious career, John has appeared in movies like The Holiday, Away We Go, Something Borrowed, License to Wed, Promised Land, and Aloha. For the film, Something Borrowed, he won the award for Choice Movie Actor in Romantic Comedy by Teen Choice awards in 2011.

Apart from his movie career, John made a significant mark on the TV screens with roles in TV Series like The Office. He has won Screen Guild Awards for his performance in 2008 and got nominated by Primetime Emmy Award for The Office. Likewise, John has appeared in other TV series like CSI, American dad, and BoJack Horseman. As of recent, he is on the TV show, Jack Ryan where he is also the executive producer. John has accumulated a net worth of $20 million from his career.

John started dating Emily Blunt after they met through a mutual friend Gregg. Soon after, John and Emily got engaged in August 2008 and married two years later in  10th July 2010. They are blessed with two beautiful kids Hazel and Violet.

Previously, John dated Rashida Jones from the cast of The Office (2005 to 2006). After that, he dated Renee Zellweger in the year 2007 but did not stay together for long. As of now, John is happily married to Emily.

John grew up in Boston, the USA with his parents, Ronald and Mary Krasinski. He spent his childhood with his two brothers, Kevin and Paul. John completed his education from Newton South High School and later attended Brown University. 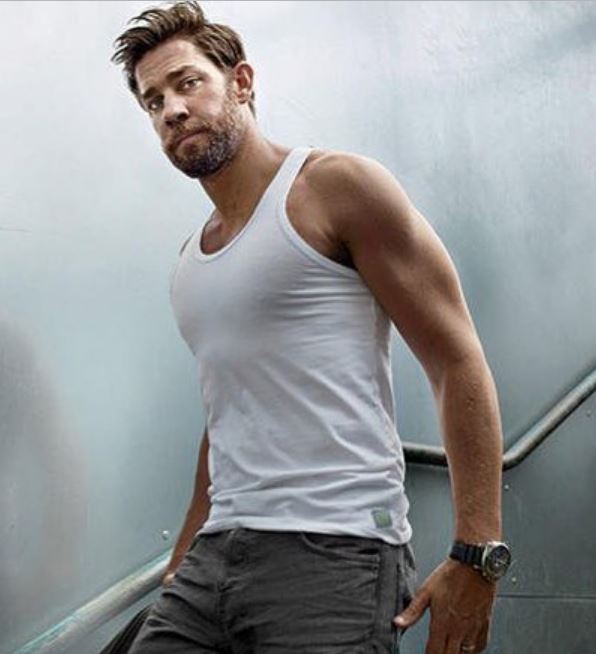 John Krasinski stands tall at the height of 6 feet and 3inches and weighs around 92 kgs. He has green eyes with dark brown hair color.