The MLB All-Star John Olerud’s daughter Jordan Olerud dies at the age of 19 who was born with a rare chromosomal disease.

Death of the loved ones is the most devastating pain which drains us emotionally and physically. Not knowing when it might happen and the inevitability of the same, when your loved one is suffering from a terminal illness, is even more painful. Hence, we cannot even hope to understand the pain Olerud Family is going through right now.

Jordan, who was among the three children of the Ex-Mate John passed away at the age of 19. She had been battling a life-long genetic disorder that had required her to be given extra attention since her childhood.  The heartbreaking news was confirmed by the New York Mets vice president Jay Horwitz who had acted as a PR representative for John during his time with Mets. 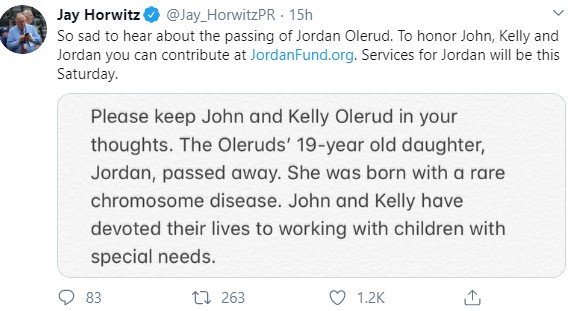 Jordan was born with tri-some 2p, 5p-, a genetic syndrome where she had an extra second chromosome and a missing part of the 5th chromosome. She was the only one known with the condition, and the same was the cause behind her death despite multiple efforts from her parents and doctors.

Jordan is currently survived by her parents and their well-wishers. The grieving family is yet to schedule a funeral for her, and we will update it when the announcement is made.

Having difficulties in life and constantly battling with it requires a lot of effort, and Jordan was quite brave in that regard. Because of her condition, she was not able to engage herself in any income-generating activities. However, her father’s net worth stood at $34 million.

Jordan Olerud was born in August 2000 to baseball player father John Olerud and mother, Kelly Olerud. Since she was born with a rare genetic disease, she had needed extra care and attention from her parents and doctors alike.  When she was eight years old, she wasn’t walking but just attempting to walk. She had multiple physical difficulties.

To help the children with special needs that required attention, in 2003, her father had even created “The Jordan Fund” in her name.  Her brother is named Garrett, and her sister is named Jessica. Her grandfather, John E. Olerud, was a basketball player for Washington State University.

She was a beautiful teenager with honey-blond hair, fair skin tone, and hazel eyes like her father and had resembled him a lot. She was often seen with support whenever she moved outdoors, accompanied by her parents. Despite the constant battle, she had a mesmerizing smile.

Her father Jordan had gushed about her at times. Once with Boston Globe, he had mentioned:

“I am constantly amazed at her disposition. She is uncomfortable, she’s having a hard time…but yet, she’s got a smile for you. I am blessed to have a child like her”.