Josh Denny is a renowned stand-up comedian, podcaster, and TV host best known as the former frontman of Food Network’s “Ginormous Food.” However, The Food Network has sought to distance itself from the comedian after he used a sexist slur to describe women in a tweet discussing the new Texas abortion law.

Originally from Philadelphia, Pennsylvania, Josh Denny was born on 18 August 1983 under the star sign Leo. The 38-year-old comedian is American by nationality and belongs to the Irish ethnicity.

Denny landed his own show on the Food Network called Ginormous Food in 2017. The show ran for three seasons, globally syndicated in 14 countries. He has produced and hosted shows such as Big Uglies, The darkest Hour, and The Wake-Up Call. He is currently the host of “Next Week Tonight” on Censored.TV. He also hosts podcasts March of the Pigs and The Jenkum.

Denny advanced early in his career, worked his way up the corporate leader, and was an executive making around 6 figures a year before turning 30. He started making more once his stand-up comedy took off. As of 2021, Denny has an estimated net worth of $2 million.

The former Ginormous Food host is in a longtime relationship with his girlfriend, Neda Gheybi. The two have been dating since 2012. 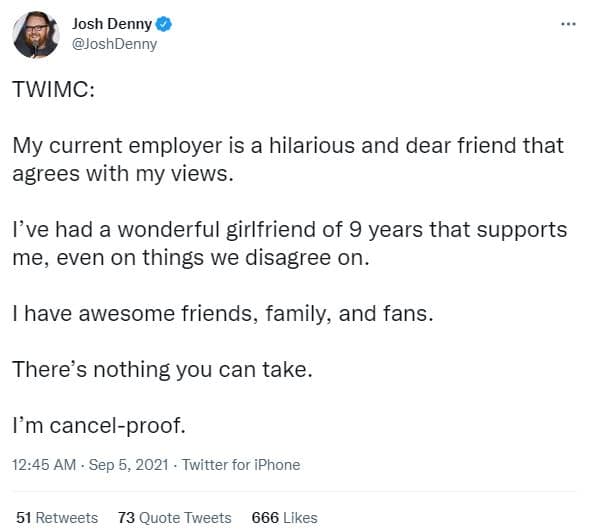 In a recent tweet, Denny said that he has a wonderful girlfriend of nine years who supports him, even on things they disagree on. His girlfriend has accompanied him several times on his podcast The Wake-Up Call with Josh Denny.

Denny was born to Irish parents. His father was a part-time musician throughout his entire life and has retired from the Philadelphia Naval Shipyard. His parents divorced when he was only seven years old. After the divorce, his mother married James Briscoe, who worked his ass off to support his son from a previous relationship.

James welcomed Denny into his family as if the comedian was his real son. Unfortunately, his mother later split with James. He has a brother named Rob.

Denny stands tall at the perfect height of 6 feet. He has a chubby, fat body that weighs around 105 kgs. He has a unique, rare combination of red hair and blue eyes.