The faith played a significant role in connecting the lovebirds, Justin Ervin, and Ashley Graham. Though the beginning of their relationship was cringe; later, they came out as a power couple with marriage tagline. On top of that, they startled the world by sharing Ashley pregnancy news.

While the plus-size model, Ashley needs no introduction in case of the professional front, the same isn’t the case for her husband, Justin Ervin. So, who is Justin Ervin? He is a professional American filmmaker and Cinematographer recognized for directing documentary-like Elephant in the Room and Six Months Later.

Justin began his career by completing his first documentary, As in A Mirror and worked as a production assistant on ‘Symbiopsychotaxiplasm: Take 2 ½. Then, between 2007 and 2008, he worked in the series called Paranormal State and Derby In Black. The Paranormal State led him to gain the limelight in the entertainment industry.

After sharpening his skills, Justin began working on the directorial project of the full-length documentary film, Elephant in The Room in 2012. The film was selected for Vail Film Festival and San Diego Black Film Festival in 2013. Moreover, his documentary even won the Best Documentary Short at the Garden State Film Festival.

Nevertheless, Justin has gained an enormous amount of fortune and fame. By creating campaigns for top brands like CNN, Guess, and The Gap Inc, his 2019’s net worth is around $2 million.

So, the duo first met each other in an elevator when Justin ran into Ashley during a charity event in a New York City church. Due to his friend pressure, he asked her out and went on a date. During the coffee date, Justin only paid half of the bill and expected Ashley to spend the rest. Seeing his behavior surprised supermodel, but later he honestly described past experiences with models who used him for money. 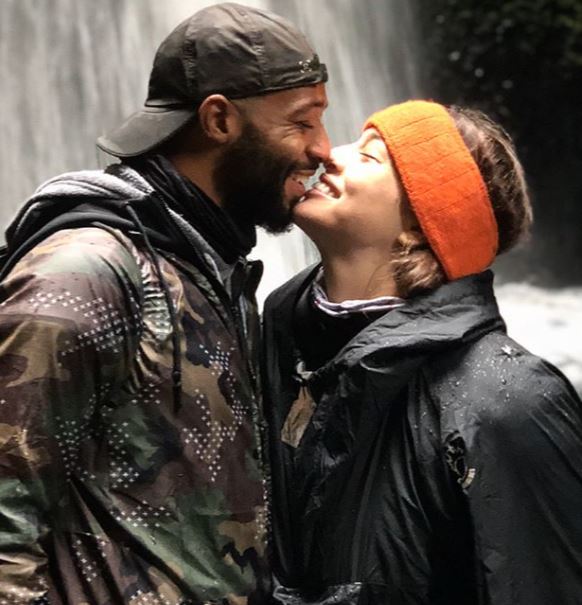 His honest led Ashley tangle in love and had dated for four months before Justin asked her to be his girlfriend. Then, the couple began their show named The Justin and Ashley Show. During one of the show, he asked her to marry him.

Though supermodel said yes, her family wasn’t satisfied with her boyfriend being African-American. On top of that, during Justin’s meet and greet with Ashley family, her grandparents surprised Ashley with their behavior as cordial but cold. Later, Justin told her that

However, as time flew, Cinematographer victoriously earned the heart of everyone, including his grandmother and wished her’s 60th wedding anniversary. Afterward, the couple shared their vows on August 2010. Though the pair were married, Justin lives in Los Angeles and Ashley in New York City due to their works. However, soulmate never goes more than two weeks without seeing each other.

Nevertheless, Justin and Ashley are soon to become a parent. The supermodel announced the pregnancy news on Instagram with a sweet post on 14th August 2019.

Justin was born to the Ervin family of Louis Ervin and Katie Griffy. His father worked as a house parent at a local high school, whereas his mother detail remains confined. However, his mother appears to adore Daughter-in-law Ashley on social media. Moreover, Justin was raised by his parents alongside his siblings, sister Kia, and brother Louis.

As Justin height measures at 6 feet, he even has gained a wide range of fame after marrying the love of his life, Ashley. He has black hair and brown color eyes.