Kelly Oubre Jr. is an American professional basketball player who currently plays for the Golden State Warriors of the National Basketball Association. To date, he has played for six seasons, starting with the Atlanta Hawks in 2015. He was traded to the Warriors by the Oklahoma City Thunder on 16 November 2020.

Originally from New Orleans, Louisiana, Kelly Oubre Jr. was born on 09 December 1995 under the star sign Sagittarius. The 25-year-old basketball player is American by nationality and belongs to blacks ethnicity. He attended Hynes Charter School and later joined George Bush High School in Fort Bend, Texas. He then transferred to Findlay Prep in Henderson, Nevada for his senior season. Finally, he played collegiate basketball at the University of Kansas.

Oubre played one season of college basketball at the University of Kansas. In the 2015 NBA Draft, Atlanta Hawks selected him as the 15th overall pick. However, he was immediately traded to the Washington Wizards, where he played three seasons.

On 17 December 2018, Oubre was traded to the Phoenix Suns and made his debut for the team after two days. He scored 13 points in a 111-103 win over the Boston Celtics on his debut match for the Suns. He then signed a two-year, $30 million contract extension with the Suns on 16 July 2019.

Oubre was traded to the Oklahoma City Thunder on 16 November 2020. However, the Thunder quickly traded him to the Golden State Warriors on 22 of November. He made his Warriors debut on 22 December 2020, putting up six points and seven rebounds. 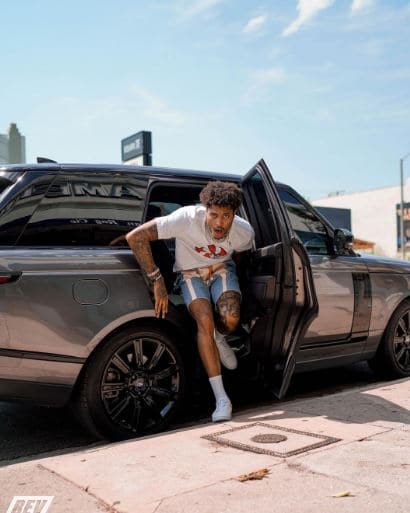 Oubre has earned a colossal net worth while playing basketball for six seasons with top teams. His yearly salary in the 2020-2021 season is $14,375,000. As of 2021, Oubre’s net worth is estimated at $20 million. However, his career earnings are roughly around $38 million.

The NBA’s hottest hunk is officially off the market. He is engaged to his girlfriend, now-fiancee Shhylynnitaa. His fiancee is an Instagram model with over 73,000 followers on Instagram. She is also a musical artist who has released songs like Princess, Boss B**ch, and Huracan under Robbonation Music Group.

Oubre popped the question to his girlfriend on 01 December 2020, and she said YES! The 25-year-old forward announced the news of their engagement via Instagram, sharing footage of the romantic proposal at a private location. The video even provided a good look at the sparkling engagement ring on Shhylynnitaa’s finger.

Oubre first confirmed his relationship with the IG model in June 2020. The couple has been inseparable ever since. The Warriors star often shares photos with his girlfriend-turned-fiancee, usually accompanied by a sweet caption.

Oubre has previously been linked to names like model Kendall Jenner and Sports Illustrated model Jasmine Sanders. He was also in a relationship with Makena LeDuff.

Oubre was born to parents Kelly Oubre Sr. and Tonya Coleman. He is the second child born to his parents. Before settling in the Eastover section of New Orleans, Oubre and his family lived in the Magnolia public housing project. His family later moved to Richmond, Texas after Hurricane Katrina in 2005.

Oubre has a towering height of 6 feet 7 inches. He has a fit, athletic body that weighs around 87 kg. His black hair and hazel eyes provide a perfect complement to his personality.