Leyna Bloom is an actress and model best known as the only transgender model to walk the runway at Paris Fashion Week for Tommy Hilfiger x Zendaya’s Fall/Winter collection. She made her SI Swimsuit debut in 2021, becoming the first transgender model to land the cover of Sports Illustrated Swimsuit.

Originally from Chicago, Illinois, Leyna Bloom Davis was born on 25 April 1994 under the star sign Taurus. The 27-year-old model is American by nationality and belongs to the Afro-Filipino ethnicity. She graduated from the Chicago Academy For The Arts in 2008.

Bloom is an accomplished trans model. She walked the runway for the Chromat label in September 2017 during New York Fashion Week. She became the first transgender woman of color to appear in Vogue India in October 2017.

In 2018, Bloom was one of the faces of the H&M x Moschino by Jeremy Scott Fall/Winter 2018 international campaign. She was the only transgender woman of color to walk Paris Fashion Week Fall/Winter 2019 at the Tommy Hilfiger x Zendaya fashion show. She became the first transgender Black, and Asian-American Sports illustrated swimsuit issue model when she appeared as a model in the July swimsuit issue of SI. 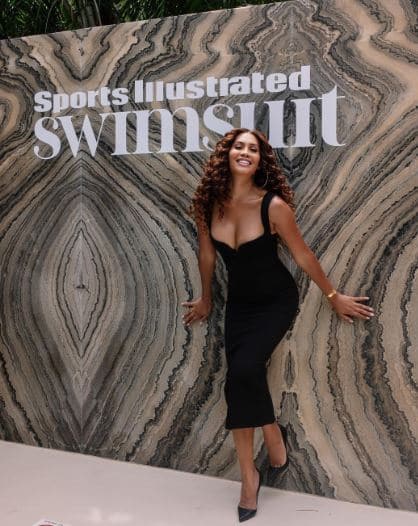 From homelessness to the pages of Vogue, Bloom has achieved great feats along with a hefty fortune and riches. She has earned hundreds of thousands of dollars from her modeling and acting career. As of 2021, she has an estimated net worth of $500 thousand.

It does not appear as if the trans model is in a relationship, and she has not shared a photo online to suggest that she is. Because Bloon leads a life in the public eye as a result of her work, there’s also every chance that she is keeping some of her personal life private.

Bloom is the daughter of a military veteran and Filipina immigrant. As a child, she grew up in poverty and occasionally struggled with homelessness.

She spent most of her childhood with her father, Aaron Davis Jr., as her mother was eventually deported. She has three half-siblings, namely, Sierra Davis, Shaun Davis, and Julia Davis.

Bloom stands tall at the height of 5 feet 10 inches. Being a model, she is quite conscious about her body weight and weighs around 59 kgs. Her curvy body measures 34-24-35 inches. She has brown hair and attractive hazel eyes.