Lisa Rinna is one of the most popular actress, author, and TV personality whose first appearance can be traced back to 1990. Since then, she has continued to keep herself mainstream appearing in many TV shows throughout the years. Besides, she is also an author and has written three books, including The New York Times best-seller Rinnavation.

Lisa Deanna Rinna was born in 1963 in Newport Beach, California, U.S. She celebrates her birthday on July 11, which makes her age 56. She holds an American nationality and comes from a mixed ethnicity of Italian, Portuguese, and English. The actress graduated from Medford Senior High School in 1981.

Lisa Rinna is famous among her fans as an actress who started her career at age 22, appearing in a music video for John Pan. She later starred as the girlfriend of Jason Bateman’s character in few episodes of The Hogan Family and, in 1992, made appearance with her most recognized role, Billie Reed, on Days of Our Lives. She has since had many appearances on TV shows such as Robot Wars, Nick Fury: Agent of Shield, Good Advice, and many others. 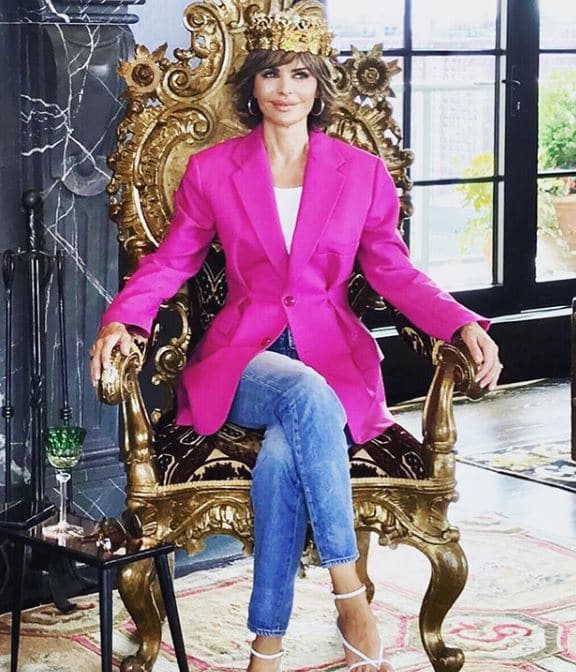 Likewise, the actress also has quite an impressive career as a host and even hosted the Soap Talk from 2002 to 2006 for which she had received for Daytime Emmy Award nominations. In 2006 she competed in the second season of Dancing with the Stars only to be eliminated in the seventh round. She later hosted TV Guide Network’s, Live with Regis and Kelly, Merge, and others. She has also appeared as a judge for RuPaul’s Drag Race and participated in many game shows. In 2014, she became a cast member of The Real Housewives of Beverly Hills from the fifth season. She also has made headlines in the fashion world and, in 2012, launched her fashion line, “Lisa Rinna Collection.” As of 2020, the actress, Lisa Rinna, holds a net worth of $8 million.

Lisa Rinna is married to her amazing husband, Harry Hamlin. Her husband is an American actor, author, and entrepreneur and is best known as Perseus in the 1981 fantast film Clash of Titans. Nonetheless, the couple exchanged vows on March 29, 1991, in Beverly Hills, California, and are still together to this very day. The couple’s romance is not dying anytime soon as Lisa makes sure she appreciates her husband on her social media.

Together, Lisa and her husband became parents to beautiful daughters, Delilah Belle, born on June 10, 1989, and Amelia Gray, born on June 13, 2001. Moreover, Lisa also has a stepson from Harry’s previous relationship.

Lisa was born to her mother, Lois, and father, Frank Rinna. Likewise, her family also consists of her sister Nancy Rinna.

Lisa Rinna has a height of 5 feet and 6 inches. Moreover, despite her age, she still manages to maintain a sleek and curvy body. Her body measures 37-26-37.