Madison LeCroy might have indulged in fame through her appearance in Southern Charm. However, she already had a professional career as a makeup and hair artist before appearing on the TV series. Nonetheless, the beautiful blonde has made headlines for allegedly breaking an iconic couple.

Madison LeCroy was born in the United States in 1990. She celebrates her birthday on October 6, which makes her age 32 and zodiac sign Libra. She holds an American nationality and comes from White ethnicity.

Madison LeCroy Net Worth and Salary

Madison initially started out working in a salon on King Street. She is a professional hair and makeup artist. Likewise, she has also earned the name “The Blonde Whisperer”. Likewise, Madison also owns a popular downtown salon, “Blush and Brushes”. 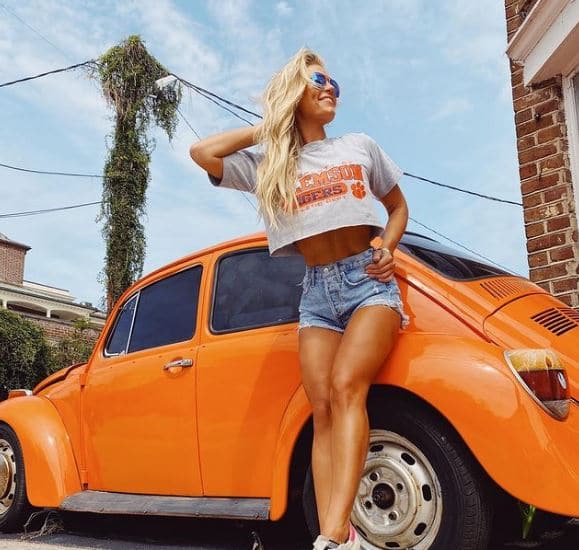 However, she earned huge popularity by appearing in the reality TV show, Southern Charm. Moreover, she has also appeared on the talk show, Watch What Happens Live! in 2019.

The reality TV artist has also made it as an Instagram influencer and has over 551K followers on her Instagram and is often advertising various brands. She is often flaunting her extravagant lifestyle on her social media. As of 2022, Madison LeCroy has an estimated net worth of $1.5 million.

Madison has made huge headlines for being involved in various controversies. In January of 2021, she shared that she formed a relationship with a married MLB player. However, many were quick to link the blonde with LeCroy. On March 12, news of Jennifer Lopez and Rodriguez came around and many thought of Madison to have a hand in the surprising split. Regardless, the duo kept the rumors to stop after sharing they had not called off their engagement but are “working through some things”.

Before, the reality star dated her co-star, Austen Kroll. The duo dated for a year and had made their relationship official in the 6th season of Southern Charm. However, the pair broke up in 2020 after Austen showed off unappealing behavior. Likewise, she had also tied the knot with Josh Hughes from 2010 to 2015. The pair share a child named Hudson.

Madison LeCroy is officially taken. She married her boyfriend-turned-husband Brett Randle in a private wedding ceremony. Brett, of whose, not much information could be found online, can be found only in Madison’s social media accounts as he does not use any.

Talking with US Magazine, Madison explained how she met her beau. She said,

“A little over two months ago I was visiting Scottsdale, Arizona, with a bunch of my girlfriends for a Bachelorette party. He was there for a friend’s birthday party. I did not know him at this time, but I go into this bar and we immediately lock eyes from across the room. It was, like, instant. And I mean you really can’t miss him. … He’s absolutely stunning.”

Moreover, it was her son who helped Brett propose Madison. She stated,

“He proposed to me in the living room, and my son’s behind him, just clapping. I completely, like, blacked out at the point of whatever he was saying. I had no idea. … It was perfect.”

On May 24, 2022, LeCroy took to her Instagram and shared her wedding pictures. As of 2022 June, Madison is enjoying blissful life with her spouse Brett Randle.

Madison LeCroy was born to her parents, Tara and Ted LeCroy. Her parents raised her alongside two siblings, a brother, and a sister, in Greenville, South Carolina.

She is often sharing throwback pictures of her family and reminisces about the past.

The beautiful blond stands tall at a height of 5 feet and 3 inches. Likewise, she has a healthy and fit body and often shares tips for a gorgeous body on her social media. She has beautiful blonde hair and attractive blue eyes.

What does Madison LeCroy do?

Madison is a businesswoman.

How old is Madison LeCroy?

How much does Madison LeCroy make?

As per web sources, Madison LeCroy makes $25,000 per episode of Southern Charm.

Who is Madison LeCroy in a relationship with?

Madison is in a marital relationship with Brett Randle.

Who is Madison LeCroy’s husband?

Madison LeCroy’s husband is Brett Randle. Before, she was married to Josh Hughes.

How did Madison LeCroy meet her fiance?

Madison met her fiance-turned-spouse in Arizona when she was having a party with her friends. When she went to the bar, Madison and Brett’s eyes met and she found him stunning.

How tall is Madison from Southern Charm?