Maia Reficco is an American-Argentine singer and actress, best known for her debut performance in Nickelodeon’s musical telenovela Kally’s Mashup. She marked her solo singing career by releasing her single Tuya in September 2020.

Originally from Boston, Massachusetts, Maia Reficco Viqueira was born on July 14, 2000, under the star sign Cancer. At a young age, she moved to Buenos Aires, Argentina, with her family. The 22-year-old singer and actress is American-Argentine by nationality and belongs to the white ethnic group. She attended a five-week program called the Young Performers Program at Berklee College of Music.

Maia Reficco Net Worth and Salary

Reficco made her professional acting debut in the Nickelodeon musical project Kally’s Mashup in 2017. She portrayed the lead role of Kally Ponce, a young prodigy who got accepted into a university music conservatory. She signed with Deep Well Records and travelled to Miami for recording music for the series.

In October 2017, Reficco attended the Kids’ Choice Awards Argentina and won the nomination for Best Actress. She also won Favorite TV Artist award at the 2018 Nick Awards. In 2018, she performed the song World’s Collide and Unisono with other casts of Kally’s Mashup at the KCA Mexico 2018 and the same song at the KCA Argentina 2018.

In 2019, Reficco portrayed the titular character of Young Eva in the Encores!, a Broadway production of EVITA at New York City Center. She dropped her first single called Tuya in September 2020.

The Kally’s Mashup star is reportedly single. The rising singer is busy making new singles and working on a new EP. She is too focused on her singing career. Also, she hasn’t been open about her love life in any interviews or on social media. Most probably, she hasn’t found anyone perfect for her or she has no interest in dating someone at present.

However, there are some rumors that Maia is dating Johann Vera.

The 22-year-old singer was born to parents Katie Viqueira and Ezequiel Reficco at the Cambridge Public Hospital. Her mother, Katie, is a prestigious singer and the director of her own Vocal Art Center. Meanwhile, her father, who graduated from Harvard University, is a professor at the Universidad de los Andes in Bogota, Colombia.

She has a younger brother, Joaquin Reficco, who has also perfected singing since childhood. 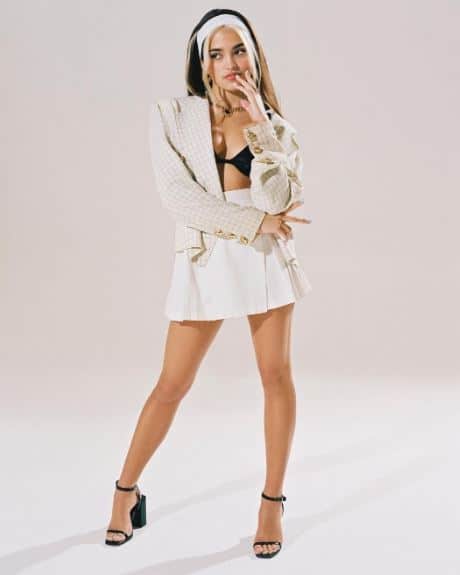 Reficco has a decent height of 5 feet 5 inches. She has a perfectly toned body that weighs around 50 kg. She has dark brown hair, partially dyed with blonde color.

How old is Maia Reficco?

Where is Maia Reficco from?

What is Maia Reficco's full name?

What does Maia Reficco do for a living?

Maia Reficco is a singer and actress.

Is Maia Reficco dating someone?

Maia Reficco is rumored to be dating her alleged boyfriend, Johann Vera.

Maia Reficco is not married.

What is the net worth of Maia Reficco?

Maia Reficco is worth $1.5 million.

How tall is Maia Reficco?