Michael Fitzpatrick was also known with the name of Michael G. Fitzpatrick was a politician and an American lawyer. He used to serve as a Republican member of the United States House of Representatives. He also represented Pennsylvania’s 8th congressional district from 2005 to 2007 and 2001 to 2017.

Michael was born on 28 June 1963 in Philadelphia, Pennsylvania, U.S. And he died on 6 January 2020 in Levittown, Pennsylvania, U.S. He was 56 years old before he died and used to possesses the birth sign of Capricorn. He was American by nationality and used to hold the ethnicity of white. Regarding his education, he went to Bishop Egan High School. Then he moved to Florida and went to St. Thomas University with an academic scholarship. Then he got his bachelor’s degree in 1985 from the school’s honors program. After that, he got his law degree from the Dickinson School of Law at Penn State University.

Brother of current Rep. Brian Fitzpatrick, Former Rep Michael G, who served four terms in the House before handing off the seat to his brother, Fitzpatrick died Monday morning after a long battle with cancer melanoma. He was battling melanoma for a long time. He died on 6th January morning, where his body gave up fighting against cancer.

As per his family members,

“He passed away peacefully this morning, surrounded by family, after a long and arduous battle with melanoma.”

Besides that, while he was battling against, he shared told that “In the aftermath, I look at life knowing I’d been given a second chance,” Fitzpatrick said. “Of course, I always appreciated my family, my wife, and six kids, seven siblings, parents – but facing your mortality somehow changes the view. What we take for granted, soars.”

Many of his well-wishers and wrote condolence towards him. U.S. Sen Pat Toomey, a Lehigh Country Republican, hailed Michael’s bipartisan work;

“During his time as a Bucks County Commissioner, and then as a member of Congress, Mike proved time and again that it is possible to work across the aisle to make progress while remaining true to one’s principles. Kris and I extend our condolences to Mike’s wife Kathleen, their children, and the entire Fitzpatrick family.”

His brother also shared sympathy towards his brother via Twitter. 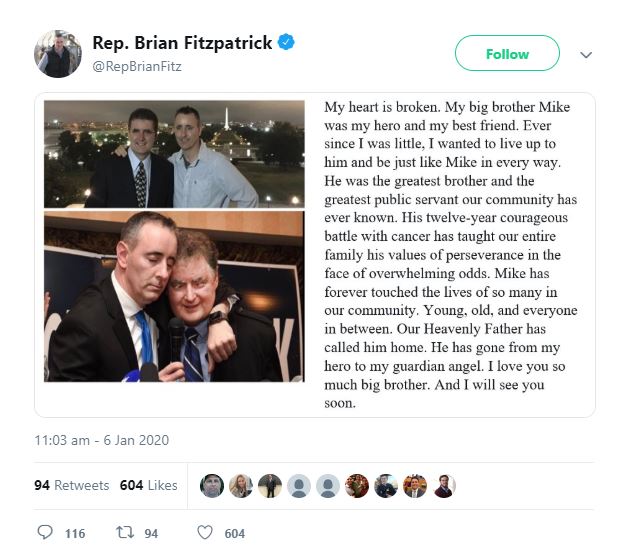 Michael Fitzpatrick is survived by his family member, wife, and his six children.

Michael started her professional career after graduating as a law student in 1988, where he was admitted to practice law in New Jersey and Pennsylvania. Then in 1995, he was appointed for Bucks Country Board of Commissioners by an eleven-member panel of country judges. There he served till January 3, 2005. 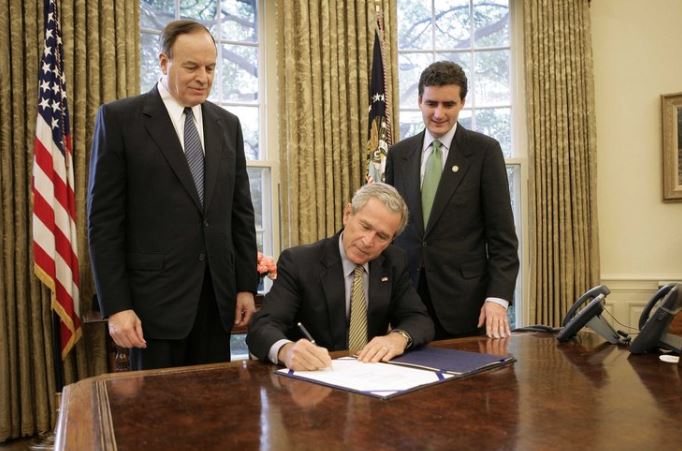 Then in 2006, he faced Democrat Patrick Murphy in the general election. Later with all precincts reporting, it was known that Murphy led the poll with 1521 votes to Fitzpatrick. After that, the year 2011 became the most awaiting moment of his career as he started serving as U.S. House of Representatives. There he served till 2017 and made many things change in his period. He was even ranked as the 10th most bipartisan member of the U.S. House of Representatives.

Serving as the U.S. House of Representatives till, for long six years, he might have earned a handsome amount of money before his death. And his estimated net worth is around a million.

Michael was a married man with his longtime girlfriend, Kathleen Fitzpatrick. However, due to his tight-lipped behavior, information regarding his wedding date is still unknown to the media. And living together, Michael was blessed with six children, Tommy, Katie, Molly, Maggie, Jimmy, and Mick Fitzpatrick.

Michael was born to an American parent. However, information regarding whom he was born is yet to be known. As a sibling, he had Brian Kevin Fitzpatrick, who is the current U.S. House of Representatives who is serving as the representative for Pennsylvania’s 1st congressional district since 2017.