Michaela Conlin is an actress whose career rose after she played the role of Angela Montenegro in the popular show Bones. However, the actress makes headlines yet again as she appears in the movie Bad Trip, and the series, For All Mankind. Likewise, she has an impressive credit as she has appeared in many shows and series, including Yellowstone and Enchanted.

Michaela Conlin was born in 1978 in Allentown, Pennsylvania. She celebrates her birthday on June 9, which makes her age 42 and zodiac sign Gemini. She holds an American nationality and comes from mixed ethnicity of Irish and Asian. The actress attended New York University Tisch School of the Arts.

Michaela starter her career after graduation from NYA and joined the cable documentary series, The It Factor. Later, she moved to Los Angeles and landed her first starring role in the ABC drama series, MDs. After appearing on other series such as JAG and The D.A., she had her breakthrough role as Angela Montenegro on the popular Fox drama Bones. She played the role from 2005-2017 and earned a nomination for an Asian Excellence Award in Supporting Television actress.

Since then, she has appeared on other shows such as Casual and Here and Now while having recurring roles in Yellowstone and For All Mankind. Moving to the big screens, she made her debut in 2001, playing the role of Cara in Love the hard Way, followed by her appearance in Pipe Dream, Garmento, Open Window, Enchanted, The Lincoln Lawyer, and others. Her recent appearance includes the 2021 movie Bad Trip. As of 2021, Michaela Conlin holds a net worth of $4 million.

When it comes to sharing the bits of dating life, Michaela has been very private. She has rarely shared her personal life and has never talked about her relationships on the media. However, it has not stopped fans from linking her to her co-star TJ Thyne. According to sources, the pair had dated for five years before breaking up.

On the other hand, she was also linked to Iceland’s legendary soccer player, Arnar Gunnlagsson. The pair made headlines in 2012 and allegedly spent the 2012 New Years’ in Iceland. Moreover, they were also spotted together on various occasions. However, the pair are no longer together. 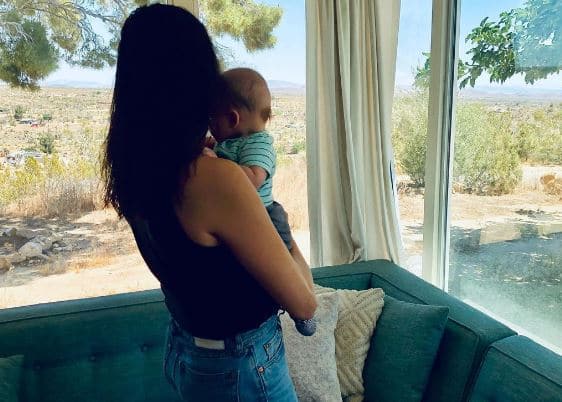 Regardless, the actor does share a child with a mysterious partner. She has featured her adorable son, Charlie, born in 2019, on various social media posts.

Michaela Conlin was born to her parents, Fran and Denise Conlin.

The beautiful actor has a height of 5 feet and 7 inches. She has a slim-built body that weighs around 58 kg. Likewise, her beauty is magnified by her attractive black eyes and light brown hair.