Michelle Pfeiffer, an American actress, is known for playing roles ranging from intense sex appeal to emotionally distant women. Her performance has won her several accolades like Golden Globe, BAFTA Award and three-time Academy Award nominations. In 2019, She made headlines for being in the movie, Maleficent: Mistress of Evil with Angelina Jolie.

Michelle was born in Santa Ana, California, the USA, on 29th April 1958. She holds American nationality and belongs to mixed ethnicity with German, French, Welsh, English, Irish and Dutch descent.

In 1978, Michelle won the beauty pageant, Miss Orange Country, and decided to dive into the acting industry. During her stint in the beauty pageants, she found an agent who helped her in acquiring movies and TV roles. In 1978, she made her debut in the entertainment industry with a small role in the TV show, Fantasy Island followed by Delta House in 1979.

She transitioned to movies in 1980 with the comedy film, Hollywood Knights alongside Tony Danza portraying love story of high school sweethearts. Subsequently, she got to be part of movies like Charlie Chan and the Curse of Dragon Queen and Falling in Love Again. In 1982, she landed her first leading role as Stephanie in the musical film, Grease 2. She didn’t like the way she was cast as the pretty girl, so she wanted to pursue more severe characters and landed the role of gangster Elvira Hancock in Scarface in 1983.

In the 1989-90 award season, Michelle dominated the Best Actress Award receiving Golden Globe, New York Film Critics Circle, and National Board of Review, and so on fo her performance in The Fabulous Baker Boys. Also, her movies life Dangerous Liaisons and The Fabulous Baker Boys earned her best supporting actress and best actress nominations from the Academy Awards. 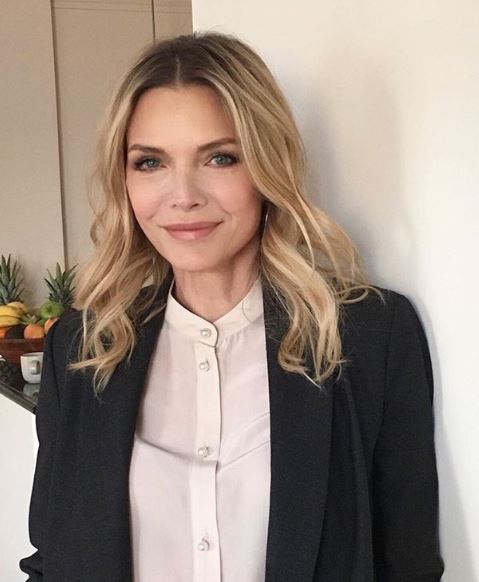 In 1992, Michelle went on to star in the superhero movie, Batman 2 as the Catwoman and received Silver Bear for Best Actress. In her illustrious career, she was part of films like The Age of Innocence in 1993, White Oleander in 2002, Wolf in 1994, What Lies Beneath in 2000 and so on.

In the 2010s, she played prominent roles in movies like Antman and The Wasp, Avengers: Endgame, The Wizard of Lies for which she got her first Emmy Nomination. As of 2019, she will be in the dark comedy movie, French Exit alongside Lucas Hedges and Maleficent: Mistress of Evil alongside Angelina Jolie.

As per Celebrity Net Worth, Michelle has accumulated a massive net worth of around $80 million from her acting career.

Michelle met her first husband, Peter Horton during their acting class in Los Angeles. In 1981, the couple got married in Santa Monica, and they worked in TV shows like One Too Many, Amazon Women On The Moon and so on. However, their chemistry did not last long and decide to part ways in 1988 and filed for divorce. Peter stated that the reason for their divorce was their devotion to their work.

Then, Michelle began dating actor/producer Fisher Stevens, and after dating for three years, they broke up. In 1993, she remarried TV writer and producer, David E. Kelly and adopted a baby girl in March. Later in 1994, she gave birth to a baby boy named John Henry Kelly.

Michelle was the second of four children of parents, Donna and Richard Pfeiffer. Richard worked as an air-conditioning contractor, and her mother took care of the house and family. She has three siblings, a brother Rick and two sisters, Dedee and Lori Pfeiffer. Her sister, Dedee, is also an actress known for TV Shows like For your love and Cybill.

Michelle is a 61-year-old woman standing tall with a height of 5ft and 7 inches. She possesses a body measurement of 33-24-35 and has blonde hair with blue eyes.