Seven fights into her UFC career, Molly McCann has established herself as a fan-favorite, embracing the spirit of her hometown of Liverpool. She has faced tough opponents in the octagon, lately against the South Korean Ji Yeon Kim. She holds a professional MMA record of 11 wins and four losses.

Originally from Liverpool, England, Molly McCann was born on 04 May 1990 under the star sign Taurus. The 31-year-old mixed martial artist is British by nationality and belongs to the Caucasian ethnicity. She attended school in the south coast town of Bournemouth and played football for Bournemouth and Liverpool Ladies.

Before signing with the UFC, McCann competed on the regional circuit and amassed a record of 7-1. On 27 May 2018, she made her UFC debut against Gillian Robertson at UFC Fight Night: Thompson vs. Till. She lost the fight in round two via a rear-naked choke. 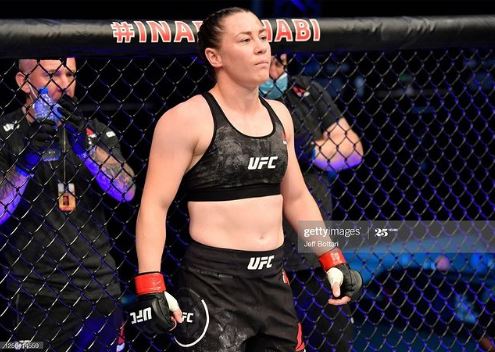 The 31-year-old flyweight has earned a hefty sum of money from her professional UFC career. Her total UFC earnings are reportedly $279,500, excluding PPV bonuses. She also makes a heap of cash from promotions and endorsement deals with sports brands. As of 2021, McCann has an estimated net worth of $200 Thousand.

The Liverpool-native is a proud LGBTQ member. Though she has been open about her sexuality, she hasn’t unveiled any details about her past or current love affairs. Her social accounts are also impotent in revealing her possible partner. Hence, she is either single or trying to keep her girlfriend away from unwanted attention, if she has one.

McCann lost her father, Paul Pearson before she joined the UFC. Before passing, her father told her:

“Go and get the belt and take care of your mom.”

The all-action fighter fights for her family’s last name and their honor. Her mother, Sharon, must be proud of her achievements. She has revealed that her mother was once an addict. She has two sisters – older sister Colette Lee and younger sister Niamh McCann.

McCann stands tall at the height of 5 feet 4 inches. As a mixed martial artist, she hits the gym regularly and maintains her body in proper shape. She weighs only 57 kg.