Noor Dabash is a social media star from Canada who rose to fame from her dance and lip-syncs videos on TikTok. On the platform, she has a massive fan base, which counts to millions. Most recently, she created a buzz on the internet when she accused fellow TikToker Nickolas Ray of sexually assaulting her.

Originally from Canada, Noor Dabash was born on 21 July 2003 under the star sign Cancer. The 18-year-old TikTok star is Canadian by nationality and belongs to the Caucasian ethnicity.

Noor Dabash rose to stardom on TikTok, where she has almost 6 million fans and 280.6 million likes for her dance and lip-sync videos. She has created a duet video with fellow TikTok celebrity, Noen Eubanks. She has also collaborated with the D’Amelio sisters, Dixie and Charli, on a dance duet video. Her sisters have appeared in a few of her videos as well.

Dabash has over 321k followers on her Instagram account @noordabashh. On the platform, she has endorsed products of various brands such as Shein clothing, The Hundreds Apparel, Jewellery and Fashion, Adika clothing, Judy Gao Couture, and Steve Madden shoes and fashion accessories.

In April 2020, Dabash created her YouTube account. In July of the same year, she released her debut video, SFX GRWM Q&A | Noor Dabash. She has mainly posted beauty and makeup videos, as well as short films, since then. As of November 2021, her self-titled YouTube channel has garnered nearly 27k subscribers.

Her primary source of income is TikTok and Instagram as well as she endorses various products on the photo-sharing platform. As of 2021, she has an estimated net worth of $700,000.

The 18-year-old Dabash is currently in a relationship with fellow TikTok star Bryce McKenzie. Her boyfriend is also known for posting dance and lip-sync performances on his self-titled TikTok account.

It’s unknown how and since when the two fell in love with each other. But the lovebirds started uploading their pictures on Instagram from October last month. There is no denying that the two makes a sweet couple.

Dabash hasn’t revealed anything about her parents. She grew up alongside her sisters who have appeared on her TikTok account. She has an older sibling, brother Diya Dabash. Her brother is also a TikTok star.

Dabash stands tall at the height of 5 feet 7 inches. She has a lean, fit body that weighs around 52 kg. She has black hair and dark brown eyes. 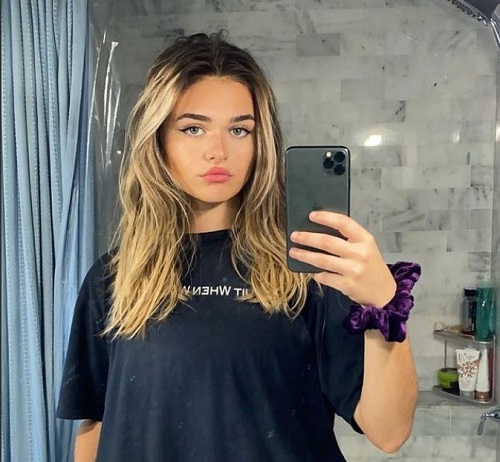