Olivia Ponton is a young talented star who has been dominating social media with millions of followers. Now, she is on her way to earning her name in the modeling world as she is signed to one of the industry’s popular management teams. Olivia started her career with a random video and now has a fleet of followers supporting her every step.

Olivia Ponton was born in 2002 in Naples, Florida. She celebrates her birthday on May 30, which makes her age 18 and zodiac sign Gemini. Likewise, she holds an American nationality and comes from White ethnicity.

Olivia is a social-media star turned model after her fame through TikTok. She randomly uploaded a video of her dancing on the platform, which surprisingly earned her over 700k views in two hours. Since then, she has managed to earn over 5.6 million followers and over 424 likes on the platform. Likewise, the influencer also enjoys another 2.9 million followers on Instagram and 141k subscribers on her YouTube channel. 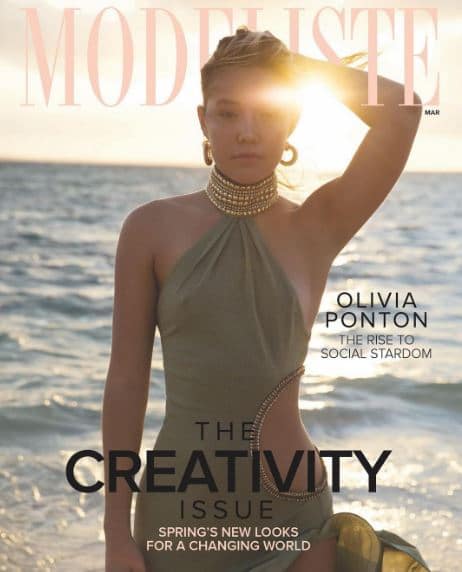 The model has taken jobs like babysitting, hostess, and interior designer’s assistant in the past. However, her biggest break came when she was signed to Wilhelmina. She has modeled for various fashion brands and magazines. Likewise, she has also collaborated with White Shore Swim for various swimwear. As of 2021, Olivia Ponton’s net worth is still under review.

Olivia’s dating life made headlines when she was dating another TikTok star, Kio Cyr, in 2020. The duo started their romance in March 2020 and dated for months. Likewise, they featured each other many times on social media and collaborated on many videos. However, the couple unexpectedly chose to part ways after four months of the relationship.

While the couple kept the reason for their breakup a secret, the model tweeted, sharing that the breakup was one of the hardest things she has gone through in June of 2020. Moreover, the pair ended their relationship on good terms. However, after her break up, many assumed Olivia to be a lesbian and dating Darianka. The model clarified, saying she was just her best friend. For now, Olivia Ponton is rumored to be dating a 22-year-old boxer, Ryan Garcia. Regardless, the pair have not confirmed their relationship despite being spotted together a few times.

Olivia Ponton has managed to keep shut when it comes to her family. The model has not featured her family on any of her social media posts and has also not shared much on them in her interviews. However, she did mention having a sister who she believes is the worst driver.

The beautiful model, Olivia Ponton, has a height of 5 feet and 9 inches. Likewise, her gorgeous body measures 32-24-36. She has a shoe size of 7-and-a-half. The model possesses stunning blonde hair and brown eyes.