Phil Foden is an English professional footballer who plays as a midfielder for Premier League club Manchester City and the England national team. Now aged 21, he has three Premier Leagues, three Carabao Cups, and a Community Shield in his medal collection.

Originally from Stockport, England, Philip Walter Foden was born on 28 May 2000 under the star sign Gemini. The 21-year-old footballer is British by nationality and belongs to the Caucasian ethnicity. He was privately educated at St. Beder’s College, with his tuition fees being paid for by Manchester City.

As a boyhood supporter of Manchester City, Foden joined the club at the age of four and signed the Academy scholarship in July 2016. He made his Manchester City debut on 21 November 2017 in a Champions League game, coming on in the 75th minute for Yaya Toure in the game against Feyenoord. 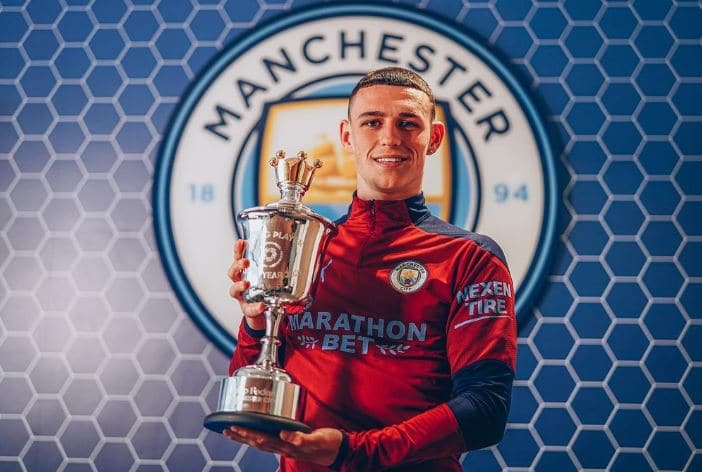 Foden has also represented England at many youth levels, scoring 19 goals in 51 youth caps. On 5 September 2020, he made his senior team debut against Iceland in a 1-0 victory in the UEFA Nations League. He was also named in the 26-man squad for the newly rescheduled UEFA Euro 2020.

The Manchester City midfielder is currently in a relationship with his long-term girlfriend, Rebecca Cooke. Though they are not married, they are the doting parents of their son, Ronnie, who was born in January 2019. The lovey-dovey couple is expecting their second child, a daughter who is due in late summer or early autumn 2021.

Foden became a dad for the first time when he was 18. He admitted that he shed a tear his son arrived. He and his partner are childhood sweethearts.

The young starlet was born to parents Claire Foden and Phil Foden Sr. He is the first child and the only son born to his parents. He has a kid sister whose name remains unknown.

Foden stands tall at the height of 5 feet 7 inches. As an athlete, he has a fit body that weighs 154 lbs. He has dyed his hair blonde. His natural hair color is dark brown, and he has light brown eyes.