Pooh Shiesty is a growing rapper who is signed to Atlantic Records and Gucci Mane’s 1017 Records. He has released a handful number of singles which has earned him huge attention. Likewise, the rapper also made headlines releasing his recent mixtape, Shiesty Season.

Lontrell Denell Williams Jr. was born in 1999 in Memphis, Tennessee. He celebrates his birthday on November 8, which makes his age 21. Likewise, he holds American nationality and comes from African-American ethnicity.

Pooh made his debut with his single, “Hell Night” on March 15, 2019. Likewise, he also released a collaborative single, “Choppa Talk”, with Big30 on August 23, 2019. His final release of 2019 came with the single, “Day One” in November 2019. In 2020, he released the single At It Again followed by other singles such as Main Slime and ABCGE after which he received the attention from American rapper Gucci Mane. He earned the opportunity to sign to Gucci’s label, 1017 Records, in April 2020.

The duo eventually collaborated on Mane’s single, “Still Remember”. Later, he released single such as Monday to Sunday, Twerksum, Back in Blood, Guard Up, and Neighbours. On February 5, 2021, the rapper released his first mixtape, Shiesty Season. As of 2021, Pooh Shiesty is estimated to hold a net worth a little under $1 million.

With Pooh Shiesty growing in popularity every day, many of his fans are interested in knowing if the rapper is dating or has a girlfriend. However, Pooh Shiesty has not shared much when it comes to his dating life. The rapper has not mentioned having a girlfriend. 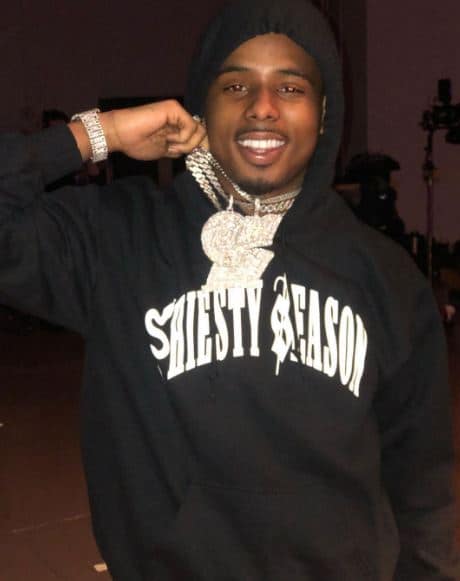 Moreover, his social media also does not hint towards him having a romantic affair.
On the other hand, he might be secretly dating and might prefer to keep his relationships private. Moreover, he also seems very much busy with his career at the moment and might not have time for dating. Regardless, we assume the rapper to be single unless he speaks otherwise.

Pooh Shiesty was born to a father who founded Tier Records. Moreover, his father is also a rapper under the name Mob Boss. Regardless, the rapper has not shared much on his mother at the moment. Likewise, information on his siblings also remains undisclosed, if he has any.

Pooh Shiesty has a height of 5 feet and 10 inches. Likewise, he has a slim build and a well-maintained physique. The rapper possesses a black hair color and black colored eyes.