The Roots musical band surely blows anyone tuning in for The Tonight Show Starring Jimmy Fallon. Questlove has been serving as the drummer for the band since the beginning. However, he is also a songwriter, disk jockey, author, music journalist, and film director. Moreover, he has recorded for many renowned artists, including Jay-Z and John Legend. However, Questlove has been gaining attention as many speculate him to be dating the ex-wife of Usher.

Ahmir Khalib Thompson was born in 1971 in Philadelphia, Pennsylvania, the U.S. He celebrates his birthday on January 20, making his age 50. He holds American nationality and comes from African-American ethnicity. He attended Philadelphia High School for the Creative and Performing Arts and Settlement Music School.

Questlove started his musical career with the Roots. The group released their first album, Organix, while their tour in Germany in 1993. Likewise, the album was followed by two other critically acclaimed records, Do You Want More?!!!??! And Illadelph Halflife. In 1999, the group had mainstream success with “You Got Me,” The band earned the Grammy Award for the Best Rap Performance by a Duo or Group in 2000. Due to the song’s popularity, Roots’ album “Things Fall Apart” achieved platinum status. 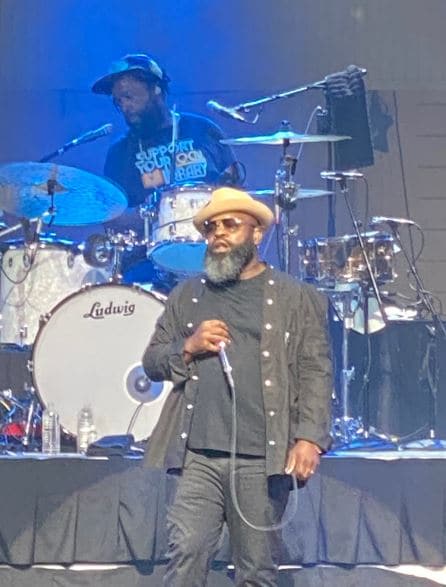 Besides, Questlove has also worked as a producer for D’Angelo’s album “Voodoo” and an executive producer on the album “Fantastic, Vol. 2” by Slum Village. In 2001, he also contributed to “The Philadelphia Experiment” and played drums for Christina Aguilera’s Loving Me 4 Me. In 2002, the Roots released another album, “Phrenology,” which reached gold status. The album was followed by “ The Tipping Point” in 2004. Besides appearing as an actor and himself in many shows and TV, Questlove has earned huge popularity as part of the Roots serving as the in-house band for The Tonight Show, Starring Jimmy Fallon since 2014. As of 2021, Questlove holds a net worth of $14 million.

Questlove has remained unmarried for years. However, the renowned musician might have finally found love. Questlove is very private when it comes to sharing his dating life. Nonetheless, he has spilled the beans on few occasions. Although the drummer has mentioned having a girlfriend during an interview with Rolling Stone, he was hesitant to reveal the identity of his girlfriend. Regardless, he left a hint and mentioned her as “Gracie.”

Questlove was born into a musical family. His father, Arthur Lee Andrews Thompson, is a singer and is famous as Lee Andrews, the lead of Lee Andrews & the Hearts. Likewise, his mother, Jacquelin Thompson, was also part of the soul group Congress Alley. Her family also includes her musician sister, Donn Thompson.

Questlove possesses a height of 6 feet and 3 inches. The drummer went through a weight loss program and lost almost 56 pounds and currently weighs near as 350 lbs. His facial features include black eyes and hair colors.