Rachel DeMita had a quick jump to success when she worked as a host for the NBA 2KTV. Despite having a stable and good-paying career, Rachel decided to risk it and start her own career as an influencer. And we must say, it was worth the risk as Rachel has earned millions of followers and is popular on platforms like YouTube, Instagram, and TikTok.

Rachel Annamarie DeMita was born in 1990 in Ohio. She celebrates her birthday on June 14, which makes her age 31. She holds American nationality and comes from White ethnicity. She was an All-American basketball player and earned a full-ride division 1 scholarship to Old Dominion University. She graduated from American University with a degree in Journalism.

Upon graduating, Rachel worked as an assistant and production intern for Entertainment Tonight in 2011. Later, she worked as a host for the show Ready Set Rachel from 2012 to 2013. Since 2016, she has also been an active YouTuber and has uploaded videos on basketball, vlogs, exercises, and Q&A. Likewise; she has accumulated over 267k subscribers on YouTube. However, she earned huge fame when she became the face of NBA 2KTV in 2014.

Rachel earned huge popularity for hosting and producing the first-ever TV show broadcast through a video game. She was also invited to play in the 2018 NBA All-Star Celebrity Game. However, she left the show in 2018 and has ventured into her own career in social media. Besides YouTube, Rachel has also earned popularity on Instagram, where she has over 1.2 million followers, and TikTok, where she has another 332.9k follower. Besides, she recently announced that she would be starting an Instagram TV series with the Action Network. As of 2021, Rachel DeMita is estimated to hold a net worth in the thousands.

Rachel is in a relationship with NBA star Andre Roberson. The pair have been together since 2018. The rumor of the duo dating emerged after they were spotted kissing in New York. They confirmed their relationship on Instagram that year. However, the duo barely features each other on Instagram, but Rachel did post a farewell message for her boyfriend, who was leaving her to enter the NBA’s bubble in Orlando.

Besides, she has also featured her boyfriend on her YouTube video, “How Well Does My BOYFRIEND Know Me!? 💕 // Rachel DeMita & Andre Roberson,” uploaded on her channel in 2019. Moreover, she can also be seen wearing her boyfriend’s jersey from when he played for Oklahoma Thunders.

Rachel was born to her parents, Shannon DeMita and Jack DeMita. She is the only child of her parents. 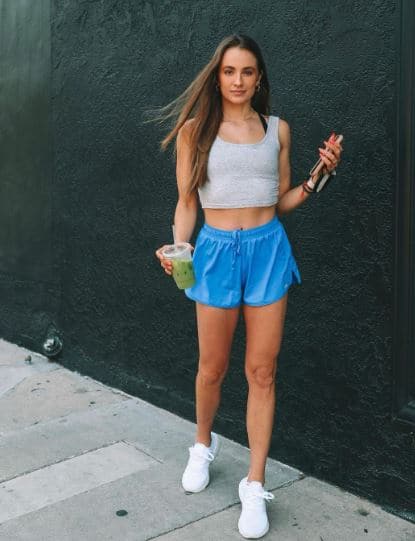 Rachel stands at the height of 5 feet and 8 inches and possesses a stunning body that measures around 35-27-34. Likewise, her facial features include her brown colored hair and dark brown eyes.