Raheem Sterling is an English professional footballer who plays as a winger and attacking midfielder for Premier League club Manchester City. He previously played for Liverpool from 2012 to 2015. He has represented England at the FIFA World Cup in 2014 and 2018 and the UEFA European Championship in 2016 and 2020.

Originally from Kingston, Jamaica, Raheem Shaquille Sterling was born on 08 December 1994 under the star sign Sagittarius. The 26-year-old footballer is British by nationality and belongs to the Jamaican ethnicity. He attended Copland School in Wembley, North West London. He also spent three years at Vernon House, a specialist school in Neasden.

Sterling spent four years with local youth team Alpha & Omega before signing for Queens Park Rangers, at age 10, as a winger. He then signed with Liverpool, for an initial fee of £450,000, with the possibility of rising to £2 million. He initially played in the club’s U-18 team and made his senior Liverpool debut on 24 March 2012. 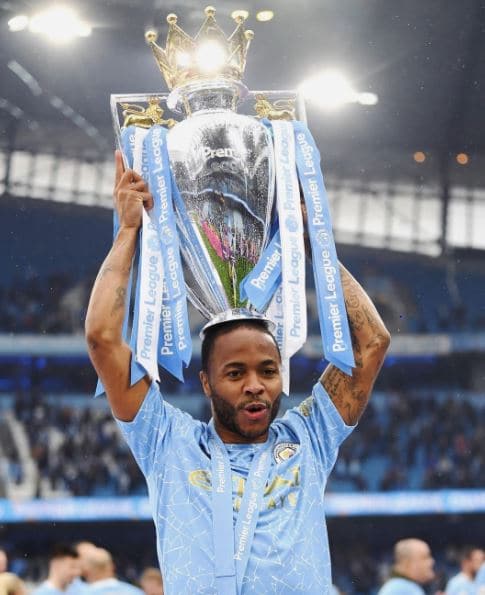 On 21 December 2012, Sterling signed a contract extension, committing his future to Liverpool. Following a lengthy dispute over a new contract, he joined Manchester City in July 2015 in a transfer potentially worth £49 million. He helped Manchester City win back-to-back Premier League titles in the 2017-18 and 2018-19 seasons. He was named to the PFA Premier League Team of the Year and won the PFA Young Player of the Year and FWA Footballer of the Year in the 2018-19 season.

Sterling is currently in a relationship with his girlfriend-turned-fiancee, Paige Milian. The couple lives together in Sterling’s home in Cheshire and shares two children of their own, Thiago and Thai-Cruz.

According to online sources, Milian is 25 years old and met Sterling back when she was a teen. She left her job at JD Sports to live in Liverpool with Sterling.

The couple had split back in 2012 but reignited their romance again in 2015. The winger was involved in another relationship between 2012 and 2015, which resulted in the birth of his first child, daughter Melody Rose, in 2012.

Sterling got engaged to his girlfriend in 2018 when he proposed with a large diamond ring. They were looking to wed in 2020, but their plans were postponed due to the COVID-19 pandemic.

The talented winger was born to Jamaican parents. His mother, Nadine Clarke, is a former competitive athlete in the Jamaican national athletics team. When Sterling was two years old, his father was murdered in Jamaica. At the age of five, he emigrated to Neasden, London, with his mother.

Sterling stands tall at the height of 5 feet 7 inches. As an athlete, he has a fit body that weighs around 152 lbs. He has black hair and black eyes.